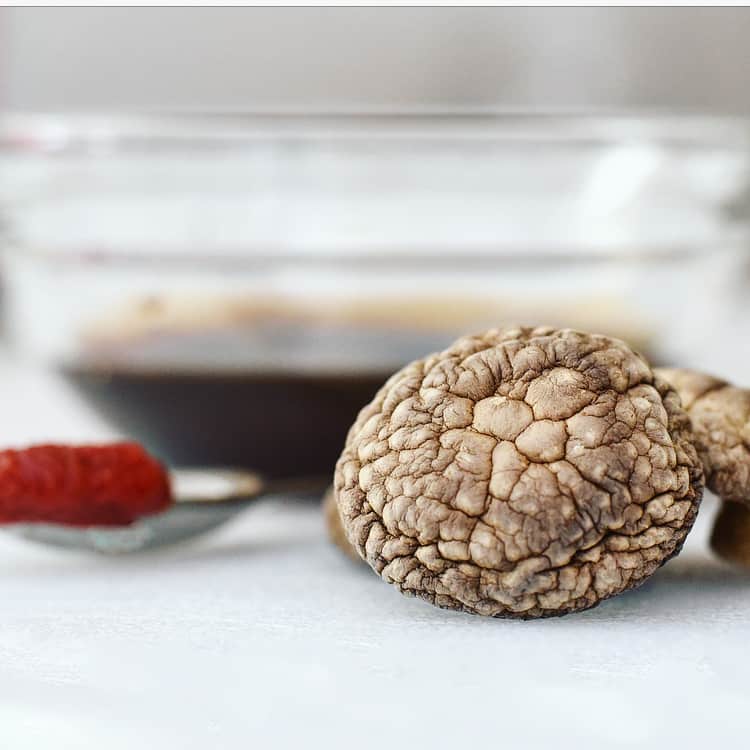 This vegan fish sauce recipe is:

This recipe uses dried shiitake mushrooms. I was able to find these in my local supermarket near the fresh produce section. You can find the same brand on Amazon. This item is 1 oz and the recipe calls for .25 oz, so you’ll be able to get 4 batches from this item.

The prep-time for this recipe is about 5-10 minutes. Cook time is approximately 20 minutes.

Looking for a vegan fish sauce alternative to get you back to eating all that yummy Southeast Asian cuisine your omnivorous-self used to love? If you’ve traveled anywhere in Southeast Asia, you know that fish sauce is a pervasive ingredient in a lot of Southeast Asian fare. What’s a vegan to do but come up with a fish sauce substitute with enough umami to take its place.

Whether you’re in Vietnam eating fresh spring rolls and wishing you could take them for a dip in Nuoc Cham (a Vietnamese dipping sauce that’s all tangy and spicy and sweet at the same time) or in Thailand drooling over a bowl of Tom Yum Soup, it’s hard not to get thwarted by the pervasive use of fish sauce.

You can’t blame Southeast Asian culture for this yummy ingredient being in just about everything though. Despite its distinctive pungency, the flavor that it adds to a dish is pretty remarkable.  It’s not an ingredient omission to be taken lightly, which makes it really tricky to veganize popular dishes that use it.  Vegan pad thai and Tom Yum Soup, two of my favorite Southeast Asian dishes, both use it.  And that short list was long enough to incentivize me to find a suitable alternative.

Identifying the Flavors of Fish Sauce

Let’s start by tackling the question of a fish sauce substitution by taking it back to the basics.

In the name of research, I did a taste test comparing fish sauce to soy sauce a commonly recommended substitute (more on that below).  Yes, I know. I tasted fish sauce.  And, yes, I know. Fish sauce is decidedly not vegan. In my defense, however: (a) I’m not sure how you can replicate an ingredient unless you know what you’re replicating, and (b) I have what I think is a pretty healthy perspective on adopting a vegan diet (which is to say, any effort is good; a good effort is great and striving for perfection usually leads to disappointment). You can read more about my personal philosophy on my About Me page.

The Enigma of the Five Primary Taste Sensations: Umami

Umami is a bit of a buzz word in foody circles. This fifth taste sensation is the Japanese word for deliciousness. Americans more commonly refer to it as “savory.”  It’s a very difficult taste sensation to wrap your head around, unlike salty or sweet.  Words often used to describe it are: full-bodied, rich, and depth-of-flavor. My favorite definition came from a White Paper from the Academy of Nutrition and Dietetics Evidence Analysis Library.  (I am nothing if not a sucker for going down the research rabbit hole).  In that paper, they described umami as “a basic taste which increases the palatability or pleasantness of foods.”

Fish sauce gets credited with having a ton of umami. Soy sauce, on the other hand, is described as having less umami. Armed with my new definition, I tasted them both. First the fish sauce. It was salty for sure, but with a very even taste experience. Soy sauce on the other hand, had peaks and valleys of taste sensations.  It was almost like where one sensation would leave off, another would take over. I credit this difference to the umami; and, I can see where using soy sauce in place of fish sauce would change the experience of a dish. I tend to think that just replacing fish sauce with salt in vegan recipes would be the better option.  But hold on, I’m going somewhere with this…

Vegan Fish Sauce: A Substitute Without the Fish?

Fish sauce is traditionally made by coating anchovies in salt and fermenting them, sometimes for up to two years.  This two-ingredient basic recipe begs the question: does fish sauce taste like fish?

I don’t think it does. And, it doesn’t really smell like it either. So a fishy experience wasn’t something I chose to pursue in this recipe. But many vegan fish sauce recipes online include seaweed as an ingredient. In my first draft of a recipe for vegan fish sauce, I did as well.  I was just operating on the assumption that fish sauce would taste like fish, so I added it. [Hence the need for a taste test when trying to replicate an ingredient].

In addition to being salty and having what I described as an “even” taste experience, fish sauce has a certain “tang” to it. It’s not quite sour, but there’s definitely something lurking in there.  I did a little research and the tang is the result of fermentation.  Think about beer, soy sauce, miso, kombucha, kimchi and sauerkraut. All fermented foods (and beverages). They all have that same “tanginess” to them.

What About the Sour, Sweet and Bitter Taste Sensations?

Often when you read vegan fish sauce recipes, you’ll see additions of lime juice, vinegar, sugar, garlic, peppercorns. I can see where and why these ingredients get included and, in my first vegan fish sauce recipe, I included several of them. We talked about sour above, which I think isn’t quite sour, but the tanginess of fermentation.  I left out any ingredients designed for sour.

Sweet is a little trickier. Many commercially made fish sauces include sugar in the ingredients, so while sweet isn’t a traditional sensation you get from fish sauce, it might be one that’s worth pursuing in your kitchen. I attempted sweet by adding caramelized tomato paste to my recipe. More on why I included tomato paste at all below. I didn’t get bitter at all, so I left it out altogether.

Here’s where all of that research left me:  I need:

Here’s what I picked for my ingredients:

The miso and soy sauce are my fermented ingredients.  They’re also salty.  While soy sauce has a different flavor profile than fish sauce, I decided to include it, but to temper it with some other plant-based ingredients known for umami. Those ingredients are the tomato paste and the dried shiitake mushrooms. I sought just a hint of sweet by caramelizing the tomato paste first – a step that I think is the key to using tomato paste in any recipe.  The water is there to draw out the flavor from the mushrooms, dilute the intensity of the soy sauce and bring the whole thing together. As you’ll see, the recipe calls for ½ of the liquid to be reduced. 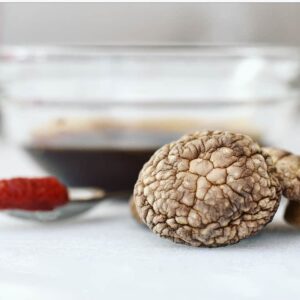 Looking for a vegan fish sauce alternative to get you back to eating all that yummy Southeast Asian cuisine your omnivorous-self used to love? If you’ve traveled anywhere in Southeast Asia, you know that fish sauce is a pervasive ingredient in a lot of Southeast Asian fare. What’s a vegan to do but come up with a fish sauce substitute with enough umami to take its place.
No ratings yet
Print Recipe Pin Recipe
Prep Time 5 mins
Cook Time 20 mins
Course Sauce
Cuisine Thai, Vietnamese

Herbivore’s Kitchen is a blog run by me, a plant-based home chef and aspiring food photographer.  I switched my and my family’s diet to a plant-based diet after learning about the health benefits of going vegan.  Making this change has prompted a variety of food and holistic-lifestyle related questions that I explore through this blog. I talk about how to pick and prepare the most nutritious foods, to how to reduce waste at home, to how to live a more sustainable lifestyle while on the road.