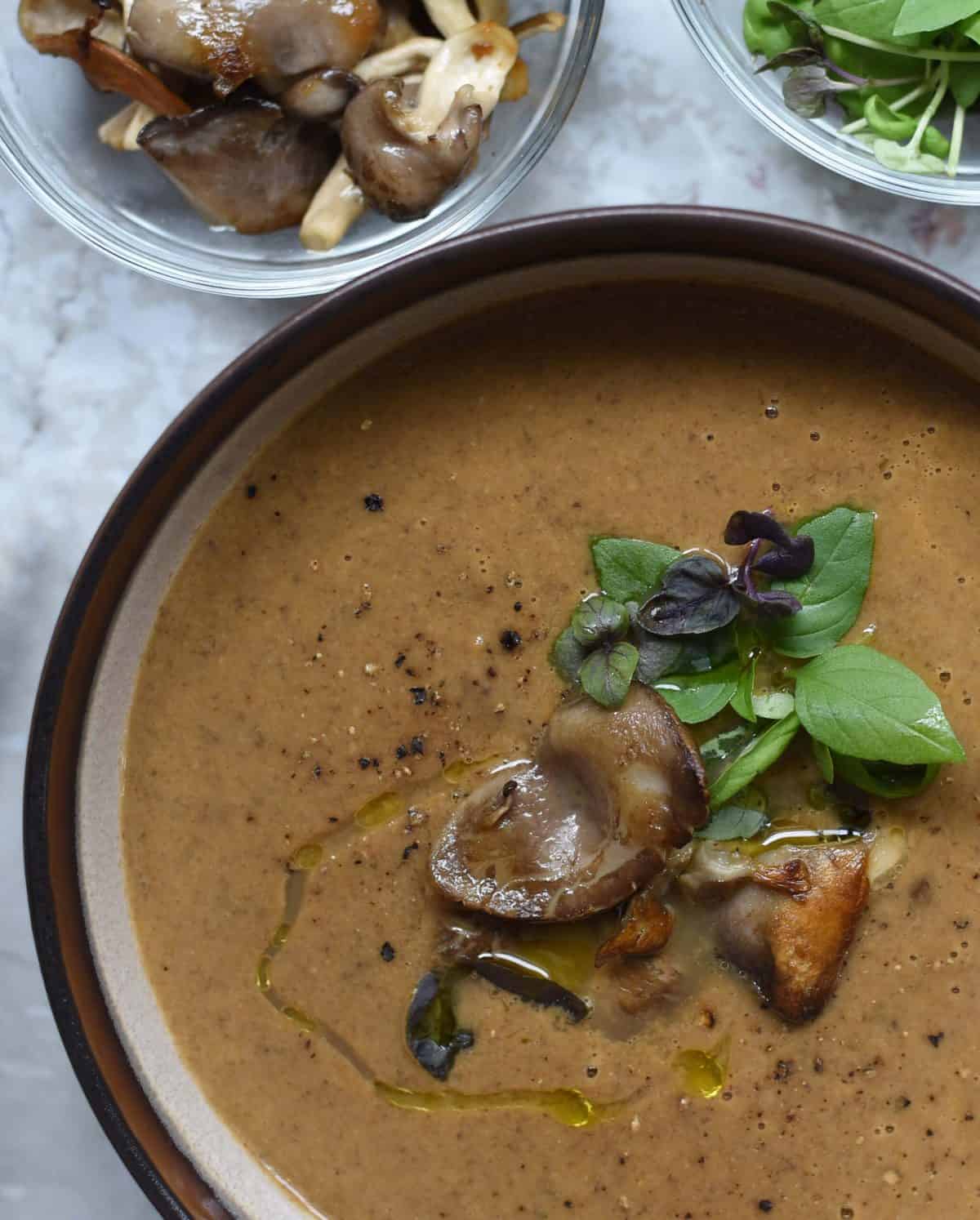 Looking for an easy vegan mushroom soup recipe? This creamy mushroom bisque is just what you’ve been craving! Savory cremini mushrooms simmered in red wine give this vegan soup recipe a ton of umami, while coconut milk gives it a richness that you’ll swear can’t be dairy-free. This easy vegan recipe is designed to appeal to vegan beginners and vegan veteran alike.

Several months ago, I committed to creating easy vegan recipes that would appeal to both vegan beginners and vegan veterans looking to put a creative, healthy dinner on the table (with yummy leftovers for lunch). This mushroom soup recipe fits that bill, I think. The ingredient list includes easy to find vegetables, oils and spices. And while I chose to top the soup with crispy oyster mushrooms, they’re not essential to the flavor of the soup. They add a nice texture and good aesthetics though, if you’re willing to give them a try!

Vegan Mushroom Soup Recipe: What Kinds of Mushrooms Do I Use?

I recommend buying cremini mushrooms loose if you’re able to – that way you can pick the freshest of the bunch. You’re looking for firm mushrooms, with no dark spots. They should be dry, but not dried out (i.e. if they are slimy or have a fishy smell, then pass on them). When you get them home, store them in the refrigerator in a paper bag and plan on using them in a couple of days.

Oyster mushrooms can be a bit harder to find, but as I said, they’re not critical to this recipe. They’re a delicate mushroom with a mild, savory flavor. For the effect you see in the picture, I washed and trimmed the mushrooms from the stem and then gently tore them into smaller pieces. You can see this step in the video. It makes them bite-sized, but also gives them a rustic effect. You can pretty much pair this soup with a loaf of crusty, homemade bread and picture yourself in a remote French farmhouse. As a trick to use less oil for this recipe, I first simmered the oyster mushrooms in a ¼ cup of water until the water cooked off. Then, I added 1 tbsp of olive oil and let them crisp up.

What Makes This a Savory Mushroom Soup Recipe?

While it’s true that mushrooms are a vegan ingredient known for umami, I wanted to coax a little more flavor into this vegan soup recipe through my other ingredients. As a first step, I sautéed the cremini mushrooms in red wine before adding them to the broth. If you’re not into cooking with wine, don’t worry. You can do this with vegetable broth (or even water) if you’d prefer.

For this vegan soup, I chose to use shallots which are more delicate than onions and offer up a more mild, sweeter flavor. They’re readily found in most grocery stores and are a nice treat if you’d like to try something new. Shallots are high in antioxidants (higher than onions) making them good allies in fighting diseases like cancer, heart disease and diabetes.(*)When you get them home, store your shallots in a cool dark place (not in the refrigerator). Like onions, you can slowly cook shallots in olive oil to bring out the most flavor. They, like garlic, are more delicate and burn easily so keep an eye on them – they become bitter when burned. If you have any shallots leftover, be sure to try my Roasted Shallot Salad Dressing recipe!

Other Vegan Ingredients to Add Depth of Flavor

The addition of 2 tbsp of tomato paste is another vegan umami trick. When sautéed for a few minutes before the liquid ingredients are added, it becomes becomes richly flavorful. I add my spices to the shallots and garlic just before the tomato paste and cook them just long enough for them to become fragrant. This way, the tomato paste becomes infused with the flavors of my chosen spices. For the creaminess, I added 1 14 oz can of full-fat, unsweetened coconut milk. When simmered with the other flavors of this soup, coconut milk lends a richness to the dish without an overwhelming flavor of coconut.

How to Bring this Vegan Mushroom Soup Recipe to Your Table

This vegan soup is very easy to make, taking about 30 minutes from start to finish. It will also make great leftovers for a couple of days if stored in the refrigerator. To serve it, I like to add salt and plenty of fresh ground pepper, as well as a drizzle of olive oil. For this presentation, I also added crispy oyster mushrooms (discussed above) and a handful of basil microgreens as toppings. The microgreens lend flavor as well as aesthetic appeal for serving. You can usually find a few choices for microgreens in the produce section of your grocery store, but I like to grow my own. They make a wonderful indoor garden project. If you’re interested in that, be sure to check out my kitchen counter herb gardening tools below (I have all of them and love them).

As I said above, having an immersion blender is like having a magic wand capable of getting your kids to eat vegetables. And, yes, I know. A lot of people didn’t like it when Jessica Seinfeld tricked her kids into eating veggies. If that makes me a bad mother, then so be it.

It seems silly, but these bottles are one of my favorite kitchen tools. They’re a great way to distribute things like olive oil to dishes (just check out how I added extra virgin olive oil to my Mushroom Soup) and for plating sauces in an aesthetically pleasing way.

I bought this a few years ago and have success growing herbs and lettuces in it ever since. I love that it is mostly hands off — perfect for someone who has trouble keeping plants alive. I use my own seeds using the Grow Anything seed pods.

These seed pods work with the Aerogarden Bounty – the indoor gardening center. I use these pods along with my own seeds to keep an indoor garden of fresh herbs going all year long.

This starter is a great way to grow your own microgreens at home! At any given time, I have broccoli, radishes and alfalfa sprouts going.

Just add water! These dehydrated soil discs are perfect for the indoor gardener. When you’re ready for your next round of micro greens, add one of these discs to the plexiglass tray and add water. Within 15 minutes, you’ll have an oxygen-rich environment for the microgreens of your choice! 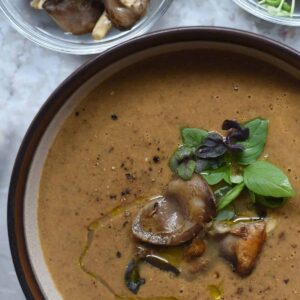