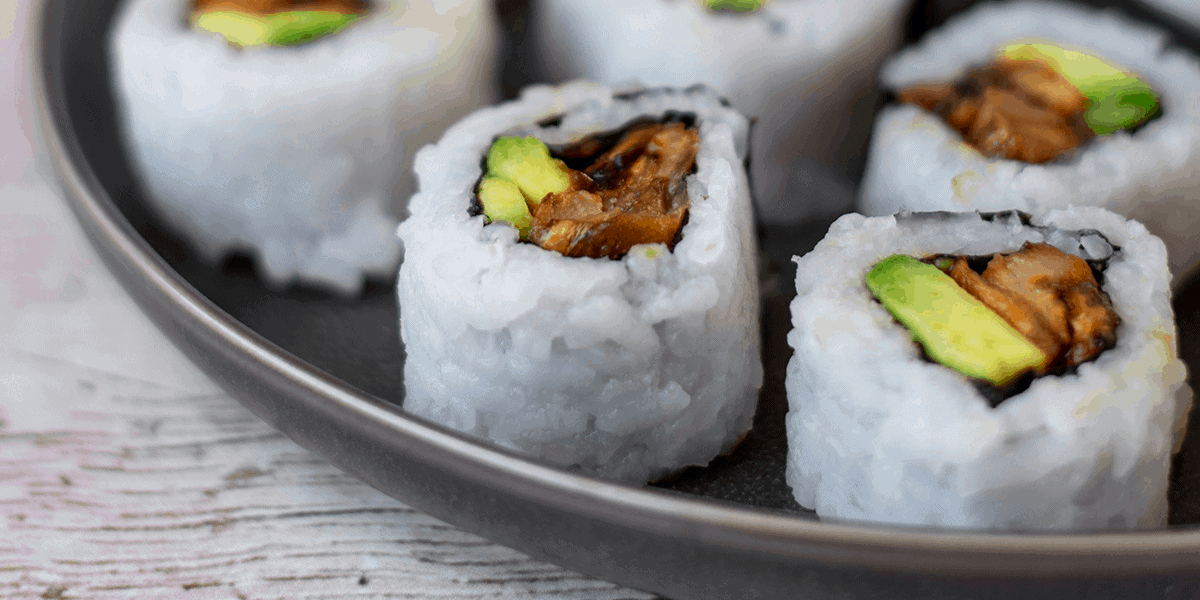 This Vegan Unagi Rolls with Miso Glazed Eggplant includes affiliate links. When I find a great product or service, I like to share it with my readers. Sometimes I use affiliate links so I can earn a commission for my recommendations. Thank you for your support!

Sometimes I really miss going out for sushi. Unagi rolls especially. I pine for the salty sweetness of the teriyaki sauce combined with the cold creaminess of fresh avocado. I long for the tanginess of sushi rice and the spicy bite of wasabi. And, of course, I just plain miss going out (#covid19timecapsule).

Because going out for sushi holds such fond memories for me, I’m always looking for inventive vegan sushi recipes to try at home. These Unagi Rolls with Miso Glazed Eggplant are the result of my quest to replace my beloved unagi rolls with a vegan sushi option.

What Are Unagi Rolls?

In their traditional preparation Unagi rolls include Japanese eel, a freshwater fish with a mild flavor. The eel is broiled in a teriyaki sauce where the sugars in the teriyaki sauce caramelize and create a sweet, salty crust. The broiled eel is then paired with cucumber or avocado and rolled together with sushi rice and nori seaweed.

In truth, my love for unagi rolls was never about the eel. It was always about the caramelized crust that the broiled eel brought to the finished roll. As such, swapping out traditional unagi rolls for this vegan sushi option was pretty easy. In fact, I think having a vegan version makes getting your unagi roll fix at home much easier.

For this sushi recipe, I decided to use eggplant as my eel substitute. When roasted, eggplant takes on a soft, creamy texture. Not quite the same texture as broiled eel, but really nice in its own right. When the roasted eggplant is combined with the caramelized effect of the broiled miso glaze, the end result is glorious! It pairs so well with creamy avocado and sweet and salty sushi rice.

Why You Should Salt Eggplant Before Roasting It

Eggplant preparation requires an extra step before roasting. Raw eggplant contains quite a bit of water. As it cooks, the water turns to steam which can lead to the eggplant becoming mushy in the oven. To avoid this and to create the crispy, broiled texture on the exterior of the eggplant, I recommend salting the eggplant and allowing it to rest for 10 minutes before introducing it to the broiler. The salt will draw out the moisture, which can then be absorbed with a clean kitchen towel.

Admittedly, I took creative liberty here. Rather than making a teriyaki sauce to broil my eggplant, I decided to go with one of my favorite eggplant preparations — miso glazed eggplant. Like teriyaki sauce, miso glaze caramelizes beautifully under the broiler. The miso paste is has a similar salty flavor to soy sauce, but I find miso paste to be so much more complex. The result is sticky, sweet, salty perfection.

What is Miso Paste?

If you’re not familiar with miso paste, you’re missing out on one of vegan cooking’s most complex and flavorful ingredients. Miso paste is made by fermenting soybeans into a thick paste. In traditional grocery stores, miso paste can commonly be found as white, yellow and red miso paste. Red miso paste is fermented the longest and is the most pungent, while white and yellow miso paste are lighter and sweeter.

Wrapping These Unagi Rolls in an Easy Sushi Rice Recipe

Not all rice is created equal and that is perhaps never more clear than when one makes a homemade sushi recipe. Sushi rice is more than plain white rice. It’s a special variety of rice seasoned with salt, sugar and rice vinegar for a perfectly tangy flavor.

What Type of Rice Works Best for Sushi Rice?

Sushi rice is a Japanese short-grain rice that becomes sticky without becoming mushy when cooked. It’s commonly identified as “sushi rice” on the packaging. If you can’t find sushi rice, Arborio rice, an Italian short-grain variety used for making risotto can be used as a substitute. I sometimes like to use Lotus Foods’ Organic Jade Pearl Rice® a sushi-style rice infused with bamboo extract (see how I used it for my Vegan Tuna Tower). Avoid long-grain rices like Basmati and Jasmine. Their low water absorption prevents the rice from becoming sticky.

Sushi rice should be rinsed and soaked for 30 minutes prior to cooking. This process reduces the starch content in the rice. While stove-top preparation works, a rice cooker (or, in my case my multi-cooker on a rice function) produces the best textured rice. Too often, I’ve found that stovetop preparation leads to overcooked rice. When cooked properly, sushi rice should strike the balance between tender and firm.

How to Make Vegan Sushi at Home

Making a vegan sushi recipe at home may sound intimidating, but don’t let it scare you away. Making vegan sushi at home is actually pretty easy. It’s also a fun way to include other family members in food preparation.

As with a lot of cooking adventures, making your own sushi at home requires the right equipment. Luckily a sushi making kit is an easy to find, inexpensive purchase. Sushi making kits typically come with bamboo sushi rolling mats, a rice paddle and a rice spreader.

Here’s how to roll sushi at home:

***Note: The images show my unagi rolls as inside-out rolls. This means that the rice is on the outside of the roll with the nori seaweed in between the rice and the fillings. This is a more difficult rolling technique. To do this, you need to put a barrier (wax paper or plastic wrap) in between the bamboo rolling mat and the rice. This will keep the rice from sticking to the bamboo mat. For the final step, slice through the wrap and the roll and then remove the wrap from the final rolls.

What’s in My Kitchen to Make This Vegan Unagi Rolls with Miso Glazed Eggplant Easier?

Making a vegan sushi recipe at home may sound intimidating, but don’t let it scare you away. It’s actually a fun way to include other family members in food preparation.

This simple sushi making kit strikes the balance between providing the right equipment and limiting your kitchen gadgets. It comes with 2 bamboo sushi rolling mats, a rice paddle and a rice spreader. All you need to make vegan sushi recipes at home!

A couple of years ago, I replaced my traditional crockpot with this multi cooker. I love this thing. It has settings for sautéing, simmering, braising, boiling, warming and… rice cooking. I like it because of it’s multi-functional settings — so much better than having separate appliances to do all the jobs that this can do!

There are a few tools in my kitchen that get used all the time and this mini 4-cup food processor is one of them. It’s perfect for sauces that don’t require me to bring out the big guns. Clean up is easy and it doesn’t take up much space.

Here’s my theory: food tastes better if it’s eaten with the utensils it was designed for. This is why I use Ramen Soup Spoons for my ramen bowls (check out my Veggie Loaded Veggie Ramen) and why I use chopsticks for dishes like my Vegetable Lo Mein.

These fiberglass chopsticks are attractive, inexpensive and reusable and won’t give you splinters! 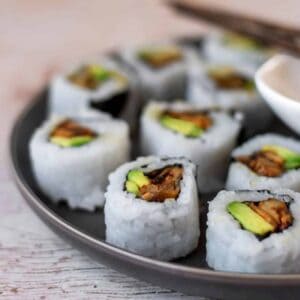