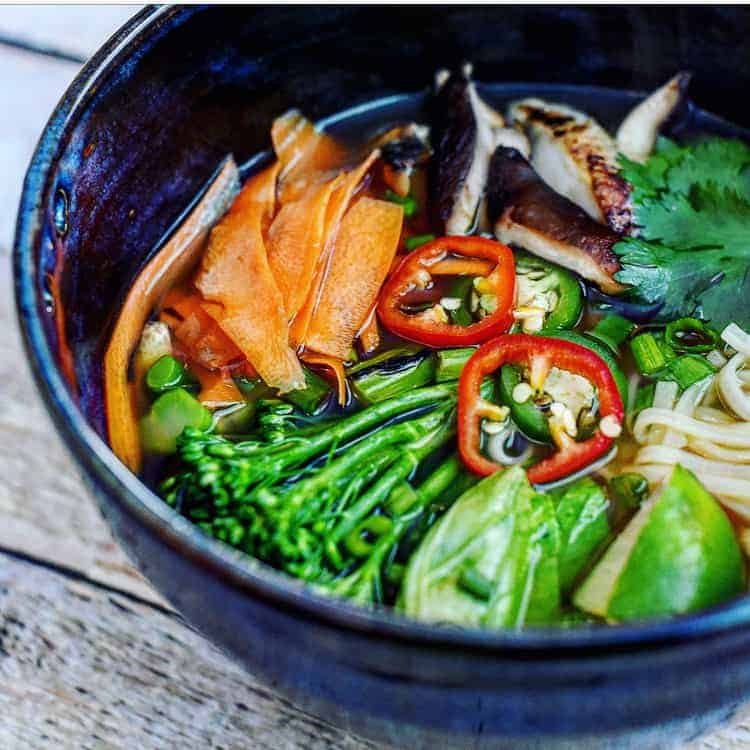 Get Ready To Get Your Pho On!

Pho is easily one of my favorite dishes.  Over the years, it’s become a Sunday night staple in the wintertime, following a day of being outdoorsy in the cold.  At first, this meant picking up simple takeout.  But, as time went on, I first became bothered with the sheer amount of trash that a single takeout meal of pho would require.  Then later, as I switched from bone broths to vegetarian and then to vegan versions, it became impossible to do as a quick takeout meal.  And that’s okay.  I’m glad for it now because it sent me on a quest to figure out how to make it myself, creating less waste and using ingredients that fit into my diet.

All of this, of course, is a preamble to say “this is not a recipe you start at 5:30 pm and have the table by 6 pm.”  It does take some preparation.  But you can make the broth in advance and freeze it for a full month of pho Sundays.  And, veggie prep is always something that can be done in advance as well, enabling you to distribute the work over time.  Of course, it always helps to have a sous chef in the kitchen to help chop.

Let’s Talk About The Broth, Shall We? 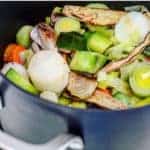 As anyone who’s ever consumed pho before knows, the beauty is in the broth.  You really have to nail this if you’re going to eat vegan pho.  On the one hand, it’s easier than traditional broth because, well, there isn’t a lot in the way of navigating animal parts.  On the other, it takes work to get a vegan broth thats deep and rich and that embraces all of the flavors that you come to recognize as pho.

I tried a variety of recipes for vegan pho and nothing quite stuck until I came across Lukas Volger’s cookbook “Bowl.”  I bought this as I was transitioning from omnivore to vegetarian and also at a time when I moved to a small town where good ethic food wasn’t less readily available.  At first, the recipes were a little daunting (for me, anyway) with unfamiliar ingredients.  But if you stick with it, this cookbook is incredibly rewarding.  Toward the back of the book, which is where I like to hang out (with its recipes for dumplings and all) there are two recipes for Vegetarian Pho Broth, one full and one quick.  They’re both good, but I put the effort into the full recipe more often than not. 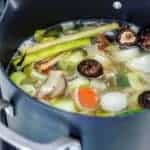 The work in making the pho broth comes before you ever light match to stove (it’s a quaint reference, I know).  First, there are many ingredients and if you’re new to the vegetarian/vegan/cooking scene some of them might be unfamiliar. There’s also a fair amount of peeling, chopping, smashing, charring, stirring and pouring.  Keep after it. Once you get these guys together in a pot, you’ll walk into your kitchen and think: pho.  It’s spot on.  And the simmering only takes an hour.

The Bowl recipe references the addition of salt and sugar in the text, but it doesn’t get into detail on how and when to add them.  That’s where I come in.  In my vegan travels, I’ve put together a vegan fish sauce, which adds both a saltiness and a sweetness to the broth and includes (in a vegan sense anyway) what the Vietnamese treat as a staple in their cooking.  And for good reason.  The fish sauce gives the broth a little more depth and umami (you know, that fifth category in the sense of taste that you feel you never learned about growing up).  In addition to that, I like to add tamari or liquid aminos. These go in after you’ve created the base broth and strained the broth from the veggies.  In other words, at the end.  And, I pretty much insist that you add lime juice when you’re prepping your bowl.  This, with a little bit of sriracha spice if that’s up your alley and you are well on your way to an epic vegan pho experience. 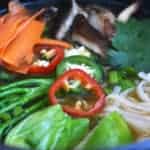 This is the fun part.  Sometimes I’ll host a pho party and cover my countertop with pho accessories.  My favorites are broccolini, carrots, bok choy, rice noodles, shiitake mushrooms, baked tofu, cilantro, sliced jalapenos, mint and thai basil.  I’m also not one to stand on ceremony here with just traditional options.  I’ll throw in sliced radishes, kale, spinach, cauliflower, squash, zucchini… really anything to get more bang for my vegetable buck. Hoisin sauce (there are vegan options on the market and I’m working on a vegan recipe), lime juice, sriracha all add to the experience as well.  For ingredients like the tofu, broccolini and the mushrooms, I prep these ahead of time.  I’ll do a quick broth-based saute of the mushrooms to soften them up, bake the tofu in a teriyaki marinade and steam the broccolini.  You can steam the broccolini over the rice noodles as they cook it you’d like. 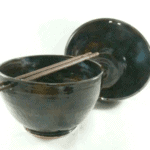 I also serve pho by placing some of the rice noodles in the bottom of the bowl, adding the broth while it’s still piping hot and then letting my guests take it from there.  The broccolini is pre-steamed, but the broth will soften the other vegetables perfectly, so I do not pre-cook those.  I’m also the proud owner of four hand-thrown pho bowls made by a local potter which make the experience all that more authentic.  I spent several hours on the hunt for the perfect pho bowls.  In the end, I found them on Etsy (love that site) and as it turned out the artist lived down the street from me.  How’s that for fortuitous?  If you’re not on your way to Colorado any time soon though, you can find them (and the artist, Blue Sky Pottery) on Etsy too. 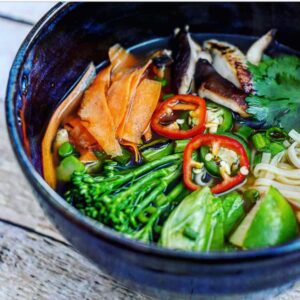 If you're looking for the perfect vegan pho, you're in the right place.  It starts with a made-from-scratch vegetable based broth and ends with a collection of brilliantly colored vegetables, some spices and fresh herbs.  The basis of the broth was originally developed by cookbook author Lukas Volger; shared with permission.
No ratings yet
Print Recipe Pin Recipe
Prep Time 45 mins
Cook Time 1 hr
Total Time 1 hr 45 mins
Course Main Course
Servings 4

I did not add any meat substitutes to this version, but in the past I've added a baked teriyaki tofu.  I love this as an addition and it does make for a more filling meal.
Keyword pho, vegan pho, vegan vietnamese food, vegetable pho, vegetarian pho
Tried this recipe?Let us know how it was!
Pin16
Share
Tweet
Email
Yum2
18 Shares
Miso Glazed Vegan Scallops Over Soba Noodles
Pho Chay Recipe

1 thought on “Vegan Pho With Vegetables”