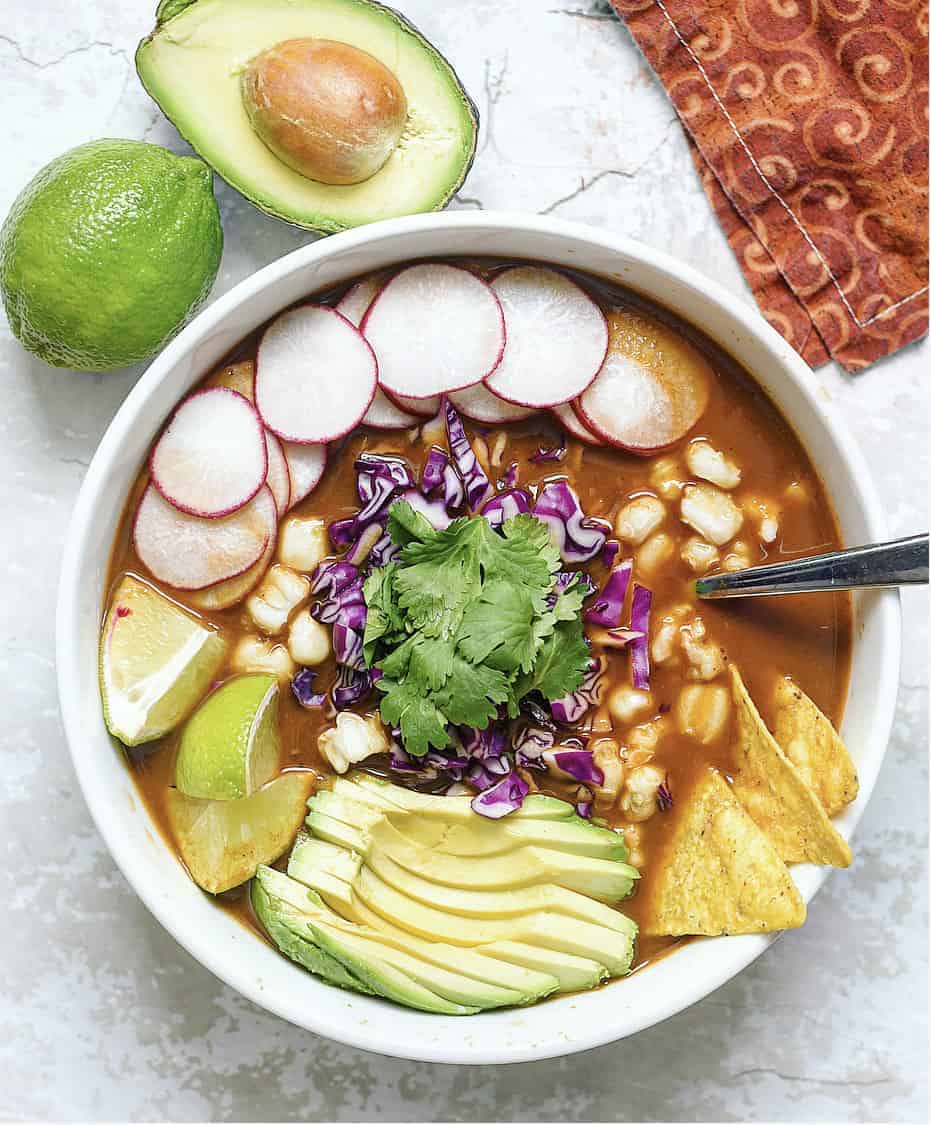 This vegan pozole is bursting with roasted chili flavor! Are you in search of some good vegan Mexican recipes? If so, then this pozole recipe should be on your list. This vegan soup recipe honors traditional pozole by using roasted guajillo chilies as its base and hominy as its star ingredient.

Pozole (sometimes also called posole) is a traditional Mexican stew, often served on holidays or for celebrations. There are three popular varieties: pozole rojo (red), pozole verde (green) and pozole blanco (white). This recipe is for pozole rojo. Pozole Rojo has a warm, robust quality that comes from roasted guajillo chilies, the main ingredient in the broth. The guajillo chilies are soaked and blended with onions, garlic and some spices to create a warm and spicy red sauce. This red sauce forms the base for this vegan soup recipe.

The word pozole means hominy. Hominy is dried maize that has been treated with lye. (1) This process works to soften the kernels, giving them a pleasant, chewy texture. Hominy is the star ingredient in pozole, although you’ll often find it accompanied by shredded pork or chicken (or, in vegan pozole recipes, kidney or other beans). Upon serving, pozole is traditionally topped with shredded cabbage, cilantro, avocado, sliced radishes and fresh limes.

I discovered pozole several years ago and I’ve been in love with it ever since. The chili-based broth has a warming quality that is unique and memorable. For that reason, I wanted this vegan pozole recipe to be as traditional as possible.

In my research, I came across several recipes that omitted dried chilies from the recipe. I can appreciate why.  Cooking with chilies can be daunting first experience.  Just ask anyone who has made the mistake of taking out their contacts after working with them. (Consider yourself warned.) While chilies impart a sort of foreboding, they’re really amazing ingredients once you get the hang of them. I encourage you to try making this pozole recipe using dried guajillo chilies – the chilies traditionally used in Mexican posole.

Guajillo chilies are a popular chili in Mexican cooking. They’re a long, dark red pepper with a sweet smoky flavor and a mild to medium heat level. I had expected them to be hard to find, but I lucked upon a package of dried guajillo chilies at my local natural grocery store. If you’re having trouble finding them at home, you can buy them online. Or, take a look at this very helpful chili substitute primer by RawSpiceBar. Some recipes I researched added other chilies to increase the heat or change the flavor profile of the pozole. For this pozole recipe, I elected to use just guajillo chilies. But, I do anticipate creating new and different versions of this vegan soup going forward.

I started by toasting my guajillo chilies. The toasting gives the chilies a smoky flavor which adds complexity to the pozole. It may seem like a step to skip, but I do find that in vegan cooking opportunities to add depth of flavor should not be missed. I think taking the meat out of a dish can often lead to a thinness, especially in a stew like this where the meat would have been braised and then slow-cooked. And no, I’m not trying to talk you out of vegan cooking, but I think it’s important to recognize that meat does have its role in flavorful cooking, so I’m always looking for plant-based ways to generate more flavor.

Different recipes call for different means to toasting your chilies. Some recipes will have you toast the chilies on a sheet pan in the oven, while others have you toast them in a skillet. I opted to toast mine in a skillet so that I could keep a close eye on them. While properly toasted chilies will give your pozole as wonderful flavor, burned chilies will impart an acrid, bitter flavor. Trust me, you don’t want that. To toast them properly, heat up a skillet and when medium-hot, quickly toast each side of the dried chilies for 20-30 seconds. You’re looking for a warm, fragrant smell.

Seeding and Soaking Your Guajillo Chilies

Once the dried chilies are toasted, they’ll be slightly softer and easier to work with. Many recipes call for you to destem and seed them at this stage. You’ll also want to remove the membranes inside the chili. Personally, I found it difficult to do this when the chilies were still dried, so I opted to soak mine first and then remove the stems, seeds and membranes.

Making the Red Sauce for Your Vegan Pozole

Once you have your chilies ready, you’ll make your red sauce which will serve as the base for your pozole broth. For this vegan pozole recipe, I did take a small break from tradition by using onions and tomato paste. As I mentioned before, pozole is traditionally made by slow-roasting pork in the broth. And, as you may know, meat often gives a dish a rich umami flavor. If you’ve ever had traditional pozole, or you’re making this dish for someone who has, you’re going to want to replicate that flavor using plant-based ingredients. Caramelized onions and tomato paste are two wonderful ways to do that.

To make this red sauce, I caramelized an onion in a large stockpot with a pretty healthy dash of olive oil. Once the onions were starting to caramelize, I added garlic, oregano, cumin and my tomato paste so that I could toast those as well. Once the tomato paste had taken on a dark red color and the combination of ingredients gave off a fragrant smell, I added my 1-part soaking water, 1-part fresh water, the chilies and two bay leaves and let it simmer covered for 10-15 minutes.

Vegan Pozole: Putting It All Together

Once you’ve got your red sauce, you’re pretty much home free on this vegan soup recipe. Use the time that the red sauce is simmering to prepare your toppings. Wash and tear the cilantro, thinly slice the cabbage, radishes and avocado and (if you’re really into it) make your tortilla chips.

After the red sauce has finished simmering, remove the bay leaves. Then, either using an immersion blender or a stand-up blender, thoroughly blend the sauce. Once the sauce is complete, add the vegetable broth and hominy and allow the pozole broth to simmer for another 10-15 minutes. You can also choose to add additional beans at this stage for added protein and/or to make the soup more filling. Kidney beans are a popular choice.

To serve the pozole, add the broth to each bowl and then top with the cilantro, radishes, cabbage, avocado and tortilla chips!

What’s in My Kitchen That Makes This Recipe Easier?

I often get asked what gadgets and tools I have in my kitchen that help me pull all of my recipes together. I included a list below along with a description about why I like them so much. If you have any questions about them, please feel free to reach out to me in the comments! 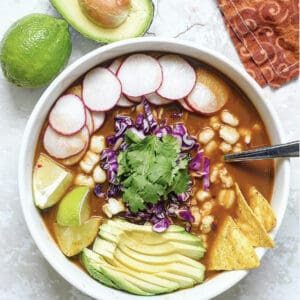 This vegan pozole is bursting with roasted chili flavor! Are you in search of some good vegan Mexican recipes? If so, then this pozole recipe should be on your list. This vegan soup recipe honors traditional pozole by using roasted guajillo chilies as its base and hominy as its star ingredient.
No ratings yet
Print Recipe Pin Recipe
Total Time 1 hr
Course Main Course, Soup
Cuisine Mexican
Servings 4 people