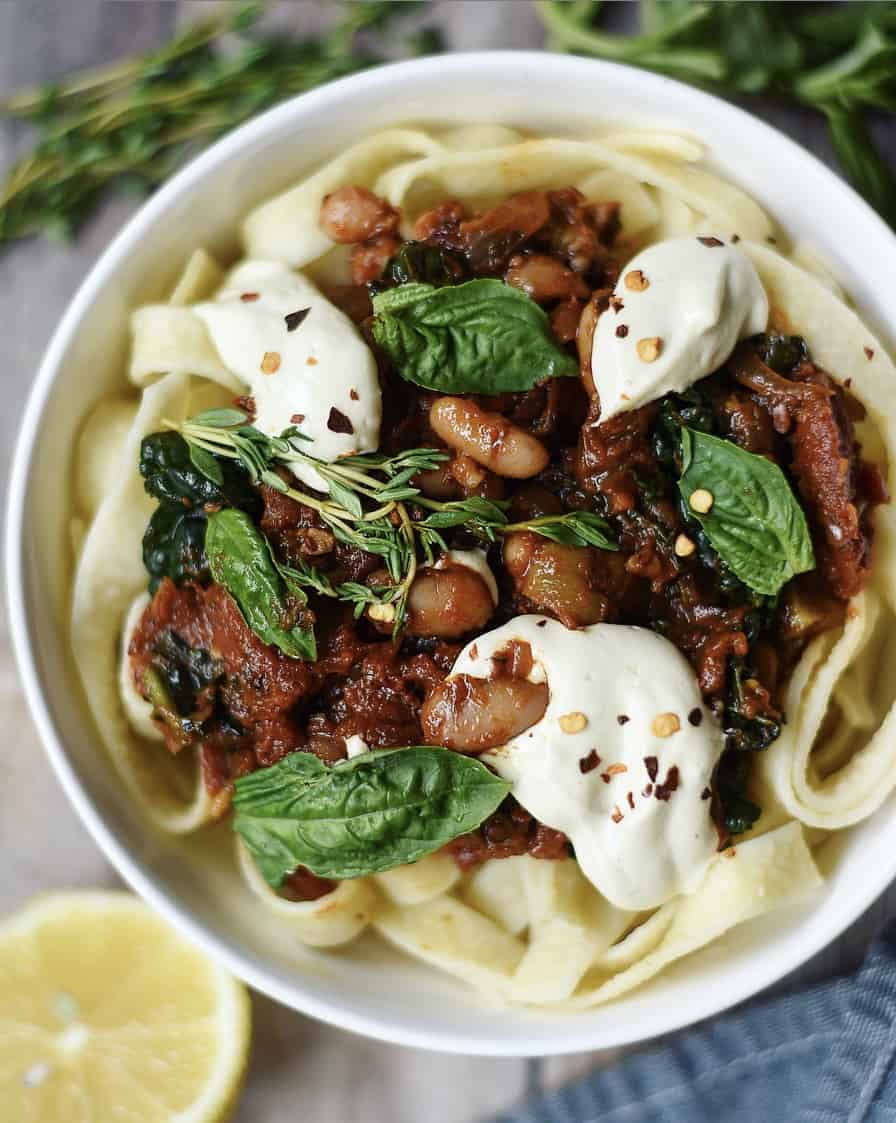 This Kale & White Bean Ragu: Perfectly Paired with Pappardelle and Cashew Cream Sauce post includes affiliate links. When I find a great product or service, I like to share it with my readers. Sometimes I use affiliate links so I can earn commission for my recommendations. Thank you for your support!

Looking for the ultimate in vegan comfort food? This pappardelle pasta with an easy kale and white bean ragù recipe will make even the coldest nights warm and cozy. Bring this Italian recipe to your table in a vegan friendly way by adding a healthy cashew cream sauce made with cashews, nutritional yeast and fresh lemon juice.

For the Love of Pasta!

There is nothing I love more than pasta. There will be nights when I am winding down in front of the TV with my family and will announce, out of the blue, that I could “really go for a bowl of spaghetti right now.” This long-held love for pasta dates way back to my younger years, where I would eat spaghetti with sugary, salty jarred tomato sauce and beg babysitters (because my mother would never let me) to eat a bowl of spaghetti sauce by itself afterwards.

While that probably sounds ludicrous because opening a jar of spaghetti sauce is far more simple than a homemade recipe, I’m here today to demonstrate that vegan pasta, with a savory sun-dried tomato sauce featuring kale and white beans, accented with a homemade cashew cream sauce, really isn’t all that hard to make. Admittedly, you may not be inspired enough to make it for a late-night snack, but you won’t need to because you will have made this wholly satisfying vegan meal for dinner already.

White Bean Ragù: Getting Protein into Your Pasta Recipes

This vegan pasta recipe is not only packed with flavor (more on that in a minute), it’s also full of good-for-you ingredients. It’s star, white beans, are a good source of vegan protein, as well as fiber, folate, manganese, thiamine, magnesium and iron. (*)

What Are the Different Types of White Beans?

This is actually a good question, as the description white beans actually covers several different types of beans which appear in different cuisines.

If you’re interested in learning more about white beans, be sure to check out my Vegucation post: White Beans: The Ultimate Guide for additional details about the different types of white beans, how to cook white beans and some other recipes using white beans.

White Bean Ragù: What About Those Other Flavorful Vegan Ingredients?

Don’t forget about the kale! I often feel like no vegan recipe is complete without kale in there somewhere. And, for the longest time, I wasn’t kale’s biggest fan. But, with a little education and some cooking tips, I’ve learned how to make this superfood tasty too!

A Lesson in Kale

For this recipe, I used lacinato kale. Lacinato kale is identified by its broad, blue-green leaves with a slight curl at the edges. This is the type of kale I use most often when making soups and sauces. Lacinato kale holds its flavor and keeps its shape in the cooking process. Curly kale, like the name implies, is a tightly curled kale leaf that’s also readily available in the grocery store. This one goes in my morning smoothies.

Tips for Cooking with Lacinato Kale

Lacinato kale sometimes gets a bad rap for being tough and bitter. In fairness though, most things tough and bitter deserve a bad rap. Combatting these descriptors with right cooking techniques can help bring this superfood into your meals with a lot more flavor (and fewer “kale again?” groans).

Don’t be fooled, despite the small quantities in which they are added, herbs and spices pack a big nutritional punch. Take oregano, for example. I bet you didn’t know that this herb is known for its antioxidant and antibacterial properties. In fact, oregano has over 40 times (by weight) more antioxidant power than blueberries(*) which has long been hailed as a superfood. A superherb, indeed.

With this information in mind, I try and incorporate herbs and spices into my cooking with intention – both for their flavor and for their health benefits. Spices, like turmeric, go into my smoothies, lentil stews and golden milk dessert drinks. Likewise, I make it a point to include oregano (both fresh and dried) when making salads and sauces, like this White Bean Ragu. For this recipe, I used OregaWild, a spice blend from the U.S.-based company, North American Herb & Spice.

This company caught my eye for its commitment to sourcing wild handpicked herbs to use in its spices. I’ve been learning a lot lately about the loss of health benefits through the commercialization of growing produce. In an effort to grow more, faster and with less cost, many of our vegetables, fruits, herbs and spices lose some of their potency. Making conscious choices about these ingredients can go a long way in optimizing their health benefits. If you’re curious about what I’m learning, I recommend Jo Robinson’s Eating on the Wild Side. This book will have you picking out the optimal onion variety in no time flat!

Sometime earlier in this post, before I geeked out about kale and oregano, I mentioned that this vegan recipe was pretty easy. And it is. Despite some shopping, chopping and cooking, in terms of homemade vegan meals, this one keeps it pretty simple. The sauce can be made in one pot and comes together quickly. If you don’t mind an extra baking sheet to wash, adding the roasted eggplant is simple and it cooks while the sauce is simmering.

Even the cashew cheese sauce is easy. Yes, you have to soak the cashews. But, as long as you do it in hot water and start it first, they’ll be ready when you are. I’ve long since abandoned the idea that cashews need to soak for more than an hour. From there, making the cashew cheese sauce is as easy as adding the soaked nuts, some water, nutritional yeast, fresh lemon juice, a pinch of salt and a clove of garlic to your blender.

To make putting this vegan recipe together as easy as possible, I laid out the directions to be efficient. You’ll notice that, as I mentioned above, you’ll soak the cashews first so that they’ll be ready when the sauce and pasta are cooked. Likewise, roasting the eggplant is the second step, so that it will be done roasting in time to be added to the ragù. This vegan darling goes really over pappardelle pasta, which you can make while the white bean ragù simmers.  After that, all you have to do is top it with fresh basil and settle in at the table, because a dish like this will have you lingering long after the meal is over.

What’s in My Kitchen to Make This Kale & White Bean Ragu Recipe Easier?

Designed to serve pasta, I use these shallow dinner bowls all. the. time. I love that I can present all of the ingredients of a dish without over-serving in terms of portion. With a standard bowl, food ends up being stacked and that’s no way to display all of your hard work. These bowls are an inexpensive, practical way to present everything from pasta bowls, curry bowls and burrito bowls.

My cast iron skillet is one of my favorite kitchen tools. It’s a great pan for a number of different recipes, but it’s especially good for the slow-cooking that this sauce requires.

Eating on the Wild Side

Want to get the most from your vegetables? This book is a brief history into vegetables popularly used in vegan cooking. It discusses how to choose the right varieties to get the maximum health benefit. 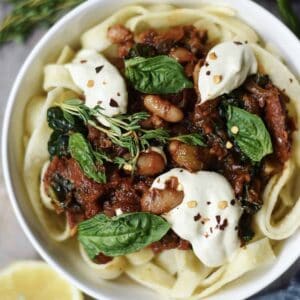 Looking for the ultimate in vegan comfort food? This pappardelle pasta with an easy kale and white bean ragù recipe will make even the coldest nights warm and cozy. Bring this Italian recipe to your table in a vegan friendly way by adding a healthy cashew cream sauce made with nutritional yeast and fresh lemon juice.
No ratings yet
Print Recipe Pin Recipe
Total Time 1 hr
Course Main Course
Cuisine Italian
Servings 4 people

For the Kale and White Bean Ragu