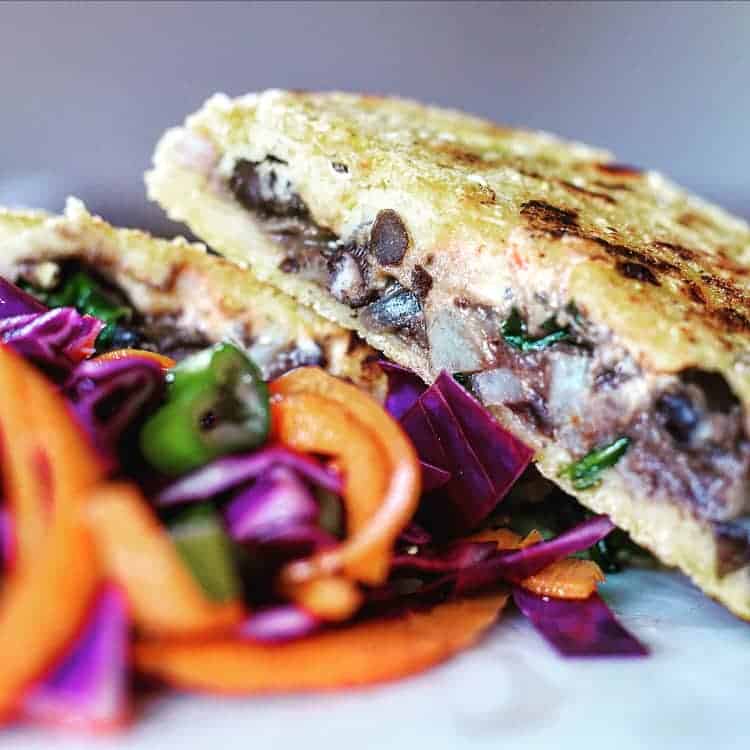 I’m always on the hunt for kid-friendly foods, especially ones that offer clever nooks and crannies to add (hide?) vegetables.  Pupusas, a traditional Salvadoran dish, are a frequent go-to option in my house. Pupusas feature a thick corn tortilla exterior and a flavorful interior. I first came across them when I found vegan and vegetarian versions of them in the frozen foods section of our grocery store. Then, when I saw what a hit they were, I thought: how hard can it be to make my own? Not too hard it turns out, with just three simple ingredients making up the batter and the freedom to make the filling whatever you want it to be.

Start with Your Filling

Pupusas are traditionally filled with pork, cheese and beans. I take creative license though when adapting recipes to be plant-based.  For this recipe, I decided on a black bean, riced cauliflower and spinach filling.  I made the filling by sautéing the riced cauliflower in a medium-sized saucepan until it was golden brown on the edges.  Once the cauliflower was done, I set it aside and put the black beans into the same saucepan with some cumin and chili powder and let them cook until the water was cooked off and the beans were soft. Then I stirred it the cauliflower and the spinach, allowing the spinach to wilt. I didn’t use any oil in the preparation of my filling, cooking the cauliflower in small amounts of water so as to allow it to soften before browning.

I had just made a batch of vegan cashew cheese, seasoned with red pepper, red onion and nutritional yeast.  It has a kick that goes well with the a beans and “rice” concept, so I decided to add a spoonful of that in each pupusa.  The recipe for the vegan cheese came from Jules Aron’s Vegan Cheese cookbook.  I make cheese from this cookbook a lot, so it’s definitely worth checking out.  Vegan cheesemaking can be time-consuming though, in that the nuts for the cheese often need to be soaked for several hours before they can be used in the recipe.  There’s also often a set time for the cheese once it’s made so that it can be sliced.  I get around this by making some early in the week and using it all week long, but if you’re not into vegan cheese making then you can skip the cheese altogether or find a good option in the store.  If you’re a vegetarian, well, you’ve got it made then. 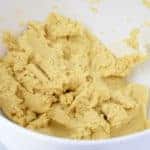 The batter for the tortillas has just three easy ingredients:  masa harina corn flour, salt and water.  You’ll want to add the water to the flour and salt mixture slowly to make sure that you get the right consistency.  When properly mixed, the dough will resemble a cookie dough batter.  Keeping your hands damp helps in forming the tortilla.

Starting with a scoop of batter about the size of your palm.  Then work to flatten it pressing it into a disc with your fingers.  Once it is about 1/4″ thick, cup the hand holding the tortilla, almost as though to form a shallow bowl.  Then add the filling and gently bring the edges of the tortilla over the top of the filling.  Then pat the pupusa back into a flattened disc.  This movement does take a little practice, but I think the trick is to not take it too seriously.  For a great video on how to make a pupusa, click here.  In the interest of full disclosure, this is a non-vegan demonstration, but you can skip to :22 so see how the filling is added to the tortilla and the pupusa is made. 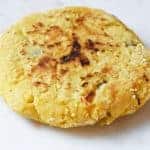 Once the pupusas are made (I lay them out on a piece of parchment paper as I work), you’ll cook them on a hot griddle.  I used a dry griddle with no oil, just as I didn’t use any oil in the filling.  Place each pupusa on the griddle and cook until the corn flour has dried, about 3-4 minutes on each side.  Keep an eye on them, though.

Pupusas are traditionally served with a tangy slaw on the side, called Curtido.  It’s a simple combination of cabbage, carrots and onions.  The dressing is a simple vinegar sweetened with a little sugar (I used agave), some salt and crushed red pepper for some kick.  I made mine without using any oil, although many recipes do include it.  Mexican oregano is also a common ingredient, but I did not include it in this version.  I used purple cabbage and scallions instead of green cabbage and white onions for some extra nutritional punch.  When making this dish, I would recommend making the Curtido first so that the cabbage, scallions and carrots have some time to marinate in the vinegar brine.  The longer, the better.

Once finished, I plated my pupusas with a small side of the Curtido. I also made a very simple guacamole for a little extra nutrition, since I made the pupusas and Curtido without using much fat.  Guacamole doesn’t appear to be a traditional addition to this dish, but I wanted a little bit more to round out the meal. 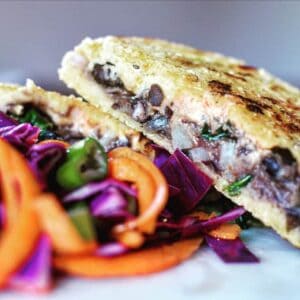 2 thoughts on “Black Bean, Cauliflower and Spinach Pupusas with Curtido”