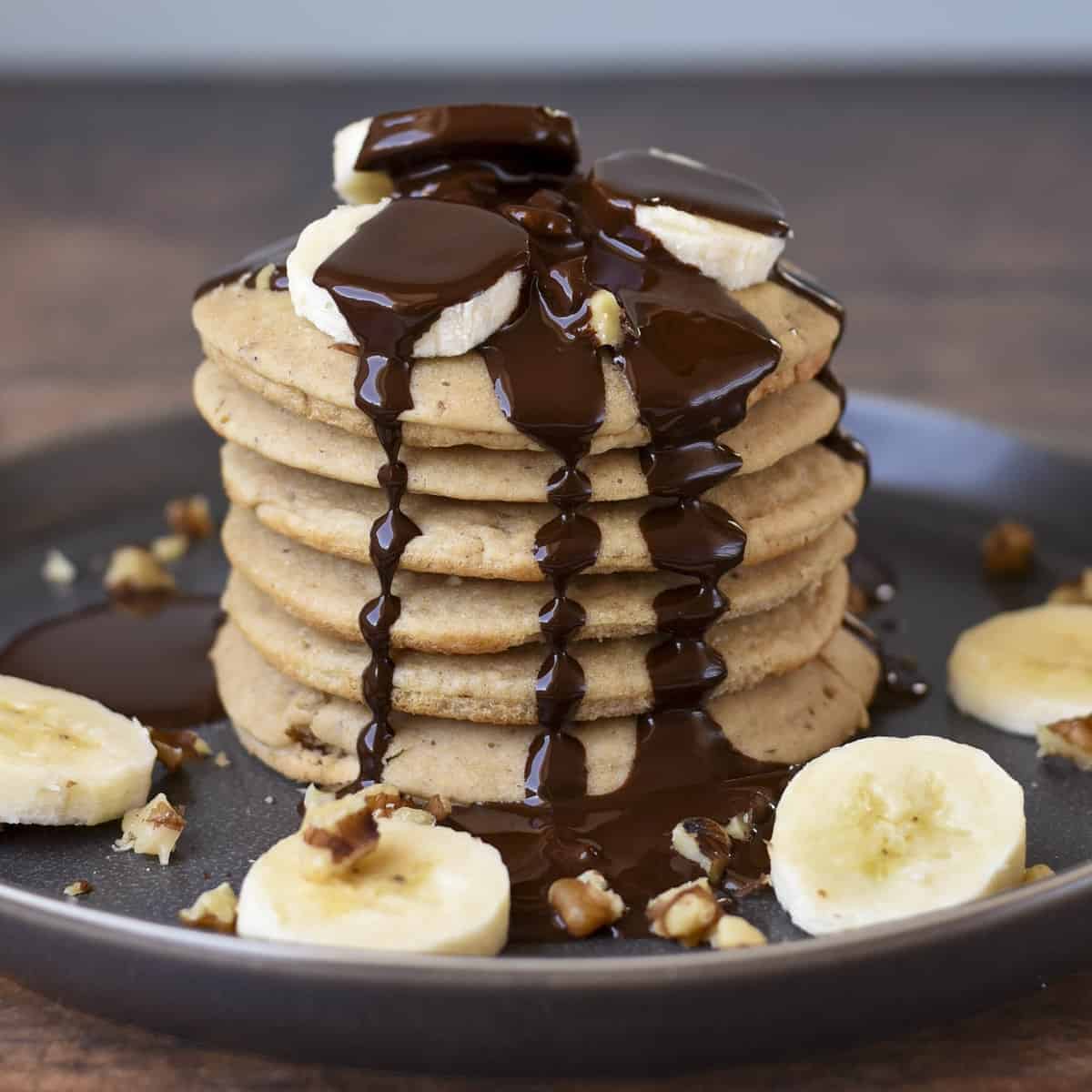 This vegan pancake recipe post includes affiliate links. When I find a great product or service, I like to share it with my readers. Sometimes I use affiliate links so I can earn commission for my recommendations. Thank you for your support!

As the gluten-free population of my friend set grows, so does my repertoire of suitable recipes. I’ll admit, I was pretty skeptical at first but as it turns out you can have your gluten-free (pan)cake and eat it too. This vegan pancake recipe is a tweak on the Orange-Scented Waffles recipe I’ve been working on for my upcoming cookbook (stay tuned – Spring 2021). For this recipe, I swapped out all-purpose flour for oat flour. If you haven’t tried oat flour yet, I think you’ll find it’s a pretty tasty substitute.

You want to know what’s even better? Flaxseeds are really good for you! They’re loaded with protein, fiber and Omega-3 fatty acids. In fact, if you subscribe to nutritionfacts.org’s Daily Dozen philosophy (as I aspire to do) you’ll find that flaxseeds get a category all on their own. That’s right – out of all the foods in the food kingdom to make a list of twelve, flaxseeds make the cut.

How to Top this Vegan Pancake Recipe

If I am being honest, I’m not sure you can top it. I mean, it has chocolate syrup. Seriously though, there are a million different ways to top these gluten-free vegan pancakes and make them special. Maple syrup is always a good choice. Or how about Chia Seed Strawberry Jam? For this recipe though, I decided on sliced bananas, crushed walnuts and a homemade chocolate syrup.

This vegan brunch item can almost double as dessert, but it’s actually not a gut bomb at all. Most of the sweetness comes from the bananas and maple syrup, an unrefined sweetener that you’ll find in many of my recipes. And that chocolate syrup – that’s simply melted semi-sweet chocolate chips with a touch of coconut oil for consistency.

When shopping for chocolate chips, don’t be fooled by cocoa butter on the ingredient list. It might have butter in the title, but this ingredient is dairy free and vegan. Cocoa butter is the fat extracted from cocoa beans. To avoid burning your chocolate chips as you melt them, I recommend microwaving them in small time increments and stirring as you go. If you try to do it all at once, you’ll for sure end up with burned bits of chocolate.

What’s in My Kitchen to Make This Banana Pancake Recipe Easier?

A waffle iron is a kitchen gadget splurge for sure! As far as I am aware though, you can’t really make waffles without a waffle iron.

This waffle iron justifies itself, also coming with pancake plates. This easy set up makes the perfect pancakes (and waffles) every time.

Did someone say burrito? That’s right! My family will often drag out this waffle maker and use it to grill their burritos panini-style. I’ve also used to it make mess-free latkes. How’s that for a kitchen gadget that keeps on giving?

These iconic Pyrex liquid measuring cups are a staple in any kitchen. I love them because they’re multi-sized, durable and can easily go into the microwave for making things like homemade chocolate syrup for my Chocolate Banana Vegan Pancake recipe or for getting coconut milk to its fully liquid state before combining in it a recipe like my Savory Mushroom Bisque.

I’ve tried a lot of non-aerosol oil dispensers over the years. Most of them were disappointments, either because they delivered a direct stream of oil instead of a mist before becoming clogged or because my hand would cramp so badly trying to hand pump out a few measly drops. These dispensers are game changers though. I have the set of two, one that keeps olive oil and a second that I filled with grapeseed oil. They help me to use a fine amount of oil when I only need a small amount. 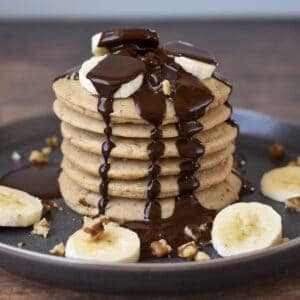 Hosting a vegan brunch with a gluten-free friend? A gluten-free vegan breakfast can be daunting, but this vegan pancake recipe is here to save the day (and make you look like an amazing vegan chef and terribly thoughtful friend as well)! This vegan pancake recipe uses oat flour to keep it gluten-free and the banana, chocolate & walnut theme makes it fun and flavorful. Banana pancakes never looked better, right?!
No ratings yet
Print Recipe Pin Recipe
Total Time 30 mins
Course Breakfast
Cuisine American
Servings 4 people