This Vegan Beef Stew recipe includes affiliate links. When I find a great product or service, I like to share it with my readers. Sometimes I use affiliate links so I can earn commission for my recommendations. Thank you for your support!

Fall has arrived! Personally, I think that there is no better vegan comfort food than stew. This vegan beef stew recipe is reminiscent of traditional beef stew with a thick, rich sauce and plenty of tender vegetables. It’s hearty and healthy and makes getting a tasty vegan dinner on the table easy!

The Trick to a Rich Vegan Beef Broth

The trick to getting a rich, savory vegan beef broth is all in building layers with your ingredients. For example, this stew recipe starts with sautéed mushrooms. Mushrooms, if you’re new to vegan cooking, are a great source of umami (also known as the savory flavor).

I like to get the most out of my mushrooms by sautéing them separately in a little bit of olive oil. To get the perfect texture, I simmer them in water first. When the mushrooms have softened and the water has cooked off, I add a small amount of olive oil and let them brown.

Onions and tomato paste are two more examples of vegan umami. In this No Beef Stew Recipe, I slow cook my onions, allowing them to sweat first and brown later. This trick allows the sugars in the onions to caramelize, creating a richness that can’t be beat. Likewise, I toast my tomato paste in the pot before adding any liquids to my stew. Toasting tomato paste until it is dark red and fragrant gives it considerably more flavor.

Where’s the Beef in this Vegan Beef Stew Recipe?

My most favorite trick though, is using a few simple vegan-friendly ingredients to replicate that rich, bacon flavor. Many beef stew recipes start with pan-fried bacon, a step that even I’ll admit adds a lot of flavor to the finished dish. With some experimenting, I’ve come up with a vegan beef broth recipe for this flavor that, I swear, will confuse even the most dedicated carnivores.

If you think about what you love(d) about bacon, you might say salt. You might also say maple. You’ll almost certainly say smoked. As it turns out, you can get all of this with a combination of tamari, maple syrup, balsamic vinegar, paprika and pepper, especially if you allow this combination to cook down into a thick sauce. When combined with the slow-cooked onions, sautéed tomato paste and browned mushrooms, this vegan beef stew recipe becomes as good the original.

Yukon Gold potatoes are my first choice of potatoes for a dish like this hearty vegetable stew. Yukon Golds have a thin, smooth skin and a bright yellow flesh (hence the word “gold” in its name). It has a sweet flavor and is ideal for stew because of its firm texture and medium starchiness. Unlike a russet potato, a Yukon Gold potato will maintain its structure when simmered in a liquid broth.

When shopping for Yukon Gold potatoes, look for medium-sized spuds. Baby Yukon Golds have a slightly different texture that isn’t ideal for a stew. Yukon Gold potatoes should be light tan in color with a firm, smooth skin. Avoid choosing any potatoes with green skins – they’re likely to be bitter and may make you sick. When you bring them home, store them in a cool, dark place.

What is Barley? Why this Healthy Grain is a Great Addition to a Hearty Vegetable Stew

If you’re not cooking with barley already consider adding it to your grain repertoire. Barley, an inexpensive whole grain, has a deliciously chewy texture and nutty flavor when cooked. It’s high in antioxidants and fiber as well as selenium, manganese and phosphorus, making it a healthy side to a variety of vegan dishes. Why go white rice when you can go barley for all these benefits?

Why You Should Be Toasting Your Grains

This extra step is totally worth it. Toasting grains (think farro, quinoa, barley and even rice) before cooking them is a great way to bring depth to their nutty flavor. There are two ways to toast your grains. You can spread them out on a baking sheet and toast them for 350º for 15 minutes or toast them in a dry skillet, stirring frequently, for about 5 minutes. When they are lightly browned and fragrant, they’re done!

This stew recipe does take time. For example, I recommend slow cooking the onions for 30 minutes. It’s easy to complete this step while the barley is cooking though. When I serve this Vegan No Beef Stew Recipe, I add the barley to the bowl separately and then spoon the stew over the cooked barley. I just find it easier to get the broth of the stew the right consistency without having to gauge the absorption rate of the barley.

What’s in My Kitchen to Make This Vegan Beef Stew Recipe Easier?

Designed to serve pasta, I use these shallow dinner bowls all. the. time. I love that I can present all of the ingredients of a dish without over-serving in terms of portion. With a standard bowl, food ends up being stacked and that’s no way to display all of your hard work. These bowls are an inexpensive, practical way to present everything from pasta bowls, curry bowls and burrito bowls. 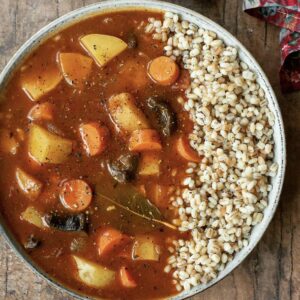