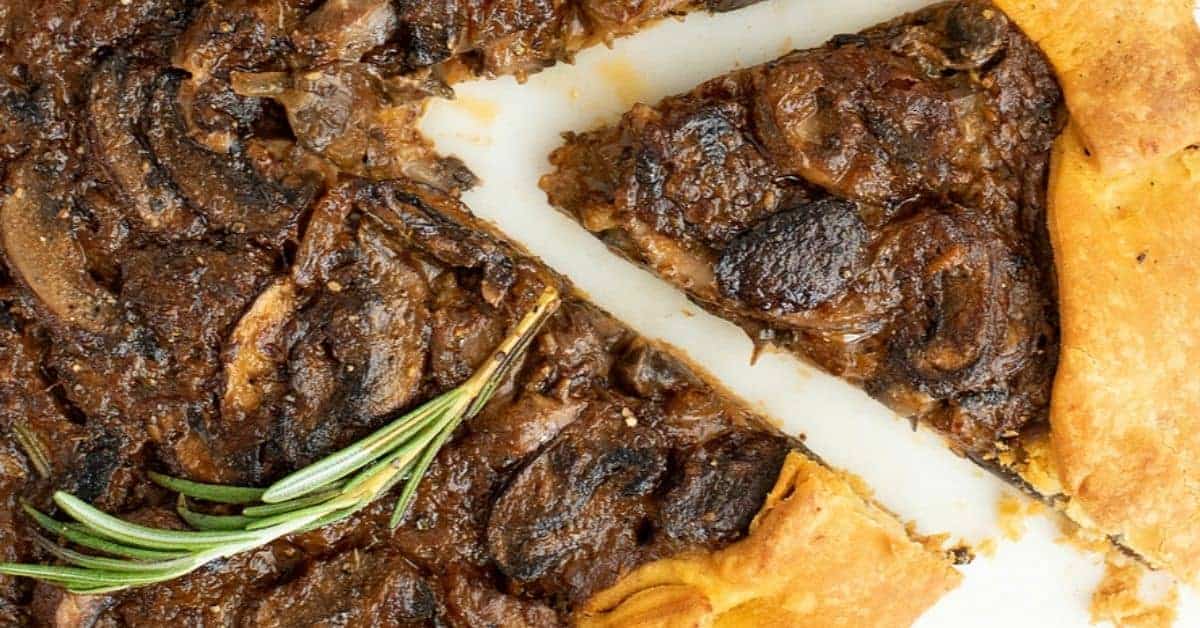 This Savory Mushroom Galette Recipe includes affiliate links. When I find a great product or service, I like to share it with my readers. Sometimes I use affiliate links so I can earn commission for my recommendations. Thank you for your support!

Did you know that galettes aren’t just to satisfy your sweet tooth? This savory galette recipe features slow-simmered mushrooms in a rich, creamy tomato sauce baked to perfection. And, yet this galette is 100% vegan friendly! While this mushroom galette looks like a million dollars, it’s actually quite easy to make — a great way to get a vegan dinner on the table this fall!

If you’re new to vegan cooking and you can’t imagine a vegan version of anything tasting as good as one with butter and heavy cream, I challenge you to try this vegan recipe. It’s decadently rich without a shred of animal product to be found.

As you know, the five basic tastes include: sweet, bitter, salty, sour and savory. Umami, if you’re unfamiliar with the term, is just a cooler way of saying savory. Umami is your taste buds reacting to glutamate in foods. Glutamate, without getting too technical, is a naturally occurring animo acid. It’s found in both plants and vegetables. When your taste buds detect glutamate in foods they send a signal to your brain that says Mmmmm…umami!!

In vegan cooking there are a few ingredients that really hit the mark when it comes to umami. Mushrooms and tomatoes are two of them. Especially when slow-cooked over low heat. It gives them time to realize their full potential. Other vegan-friendly foods that are high in umami include garlic, fermented soy (think soy sauce and miso paste), kimchi (again, fermented), corn, potatoes and seaweed.

How to Cook the Mushrooms for this Savory Mushroom Galette Recipe

While dried mushrooms pack the most umami punch, cooked mushrooms are a close second. For this galette recipe, I like to slow simmer the mushrooms in a bit of red wine. Once the wine has cooked down to about 50%, I add the mushrooms to my shallots and toasted tomato paste (see below).

Once you discover that you love cooking with red wine, be sure to give my Vegan No Coq au Vin and Creamy Mushroom Bisque a try!

This is a drum I love to beat, but I’ll say it again. If you’re not toasting your tomato paste, you’re missing out on a ton of flavor. Toasting the tomato paste brings out its natural flavors and increases the glutamates. And remember what that means — Mmmmmm, umami!

This step isn’t complicated and it only takes a few extra minutes. When the shallots and garlic are almost fully browned and the spices have achieved their aromatic potential, it’s time to add the tomato paste and sauté until it is a deep, rich red.

Did Someone Say Creamy? How to Make this Savory Galette Recipe Creamy

You might be looking for some ingenious vegan hack here, but the answer is pretty simple: coconut milk. By coconut milk, I don’t mean the kind that comes in a carton and might be used to make a morning smoothie. I mean the full-fat, unsweetened kind that comes in a can. It’s divine! And, if you’re worried about a heavy coconut flavor, don’t be. As the coconut milk cooks down, especially in the tomato broth, its coconut flavor relaxes.

Pop Quiz! What’s the Difference Between a Galette and a Tart?

This question came up this week while I was doing the research for this blog post. I’ve been making sweet galettes all summer long — apple, plum, strawberry rhubarb and peach (look for this galette recipe in my forthcoming cookbook). But, when I started doing my SEO research for this savory galette, I noticed that people are far more likely to look for a mushroom tart than a mushroom galette. So why not call this a savory mushroom tart?

The truth is, while I love the discovery of a long-tail keyword nugget, I have to call a spade a spade. And this vegan recipe is a mushroom galette and not a mushroom tart. So, what’s the difference? Well, it’s all in the crust. While tarts and galettes are essentially the same food — a pie crust with either a sweet or savory filling — it’s the form of the crust that distinguishes them. Tarts are traditionally neat. Unlike galettes, tarts are baked in a pie tin. The sides of a tart crust are structured, even and symmetrical. Galettes, on the other hand, are free form (euphemistically: rustic in their structure).

The rustic form of the galette is what I love some much about them. A galette doesn’t require a pie dish, crust crimping, lattices or any other complications that are likely to get between me and a tasty dish. All the stress of the perfect pie crust goes away. It’s just a dreamy, flaky crust and an equally epic filling.

A crostata is the Italian version of the French galette. They’re the same thing by a different name. Ooh-la-la! Now you’re ready to rock the baking category at your next trivia night!

Now that you’ve had your food vocabulary lesson for the day, let’s put this tart together! Oh! And if you need ideas for dessert, be sure to check out my Strawberry Rhubarb Galette!

What’s In My Kitchen to Make This Savory Mushroom Galette Recipe Easier?

I love having a skillet with some depth to it. I use it regularly when making a dish like this where there is some liquid that I need to cook off. A cast iron skillet would work as well, but mine is a little too small for this recipe. This is a non-stick pan, but to ease my mind about using it (and recommending it), I did a little research. In general, you don’t want to overheat a non-stick pan. Be really thoughtful when you’re preheating it on the stove before adding oil. If your oil is smoking, that’s a sign that your pan is getting too hot. And, you should use soft utensils so as not to scratch the surface. Like that handy-dandy wooden scraper I suggested above? 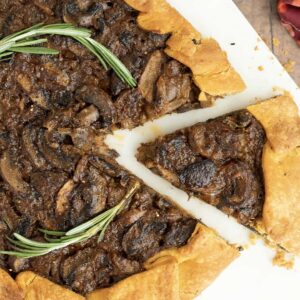 Did you know that galettes aren’t just to satisfy your sweet tooth? This savory galette recipe features slow-simmered mushrooms in a rich, creamy tomato sauce baked to perfection. And, yet this galette is 100% vegan friendly! While this mushroom galette looks like a million dollars, it’s actually quite easy to make — a great way to get a vegan dinner on the table this fall!
No ratings yet
Print Recipe Pin Recipe
Total Time 1 hr 15 mins
Course Appetizer, Main Course
Cuisine French
Servings 4 people

For the Savory Mushroom Galette Crust

For the Savory Mushroom Galette Crust