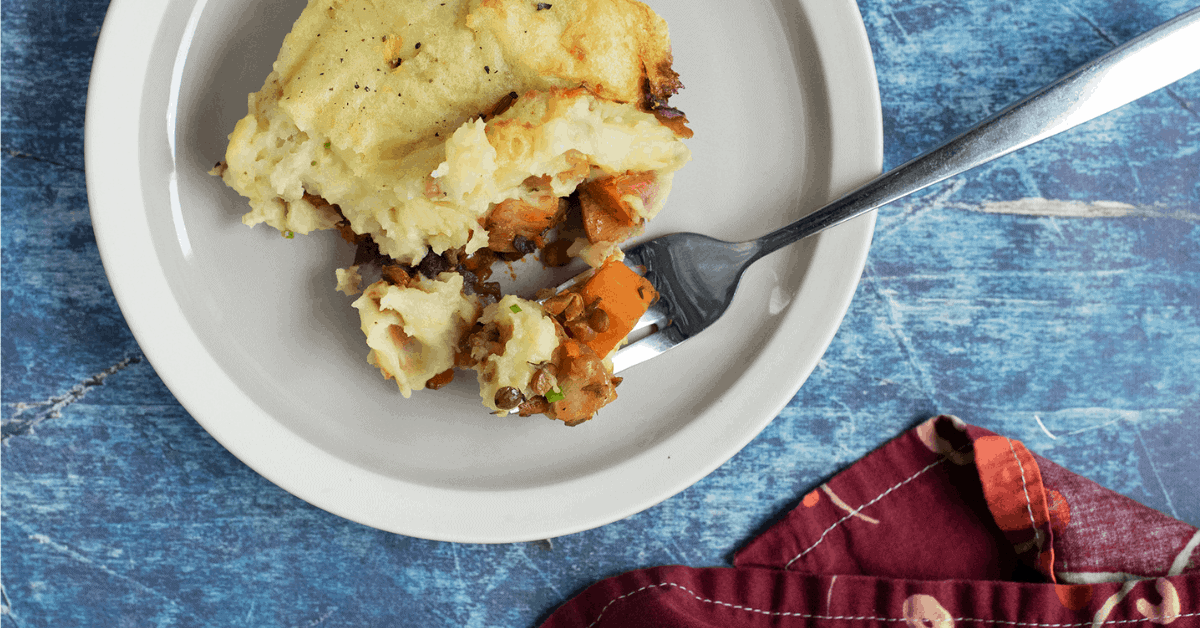 This Easy Vegan Shepherd’s Pie Recipe includes affiliate links. When I find a great product or service, I like to share it with my readers. Sometimes I use affiliate links so I can earn a commission for my recommendations. Thank you for your support!

What is Shepherd’s Pie?

Just the name inspires feelings of comfort, doesn’t it? But what is Shepherd’s Pie?

Traditionally Shepherd’s Pie, sometimes called cottage pie, is a baked casserole dish comprised of ground meat, garlic, onions and some vegetables (usually corn, peas and carrots) with a layer of mashed potatoes on top. Heavenly, right? Except if you’re not into eating meat. Never fear though, this Vegan Shepherd’s Pie is every bit as good as the original!

Converting traditional Shepherd’s Pie into a vegan-friendly dish is a pretty easy thing to do. I simply swapped out the ground beef for healthy green lentils and elevated the vegetables. Even the mashed potatoes are an easy conversion. In fact, I dare you to tell me that you can tell that they’re vegan!

If you’re new to vegan cooking, you might also be new to lentils. Lentils are little disc shaped legumes. Don’t let their size fool you though. Lentils are packed with protein and healthy nutrients like Vitamin B, magnesium, zinc and potassium. They are a true vegan darling!

There are different varieties of lentils. Lentil types are usually distinguished by color, but the differences don’t stop there. Different types of lentils have different flavors and different cook times. For example, red lentils are described as having a mildly sweet and nutty flavor while brown lentils, which I used in this vegan recipe, have an earthy taste. Red lentils cook quickly and break down, while brown lentils take a bit longer to cook and generally hold their shape.

Lentils are most commonly used it Indian dishes like Indian Dal, but I like to use them in a variety of cuisines. For example, red lentils are a featured ingredient in my Mexican-influenced Spicy Red Lentil & Roasted Cauliflower Vegan Tacos. I don’t stop there though, I also use them in my Easy Vegan Lasagna Recipe.

What Vegetables Do You Put in Vegan Shepherd’s Pie

As I mentioned above, traditional Shepherd’s Pie includes a simple list of vegetables: peas, carrots and corn. When veganizing a popular dish though, I try not to hold on too dearly to tradition. So, for this Vegan Shepherd’s Pie recipe, I included a variety of root vegetables and mushrooms.

To pre-cook the mushrooms, I let them simmer in a small amount of water. As the water cooks, the mushrooms begin to collapse slightly. Taking this step means that, when I do sauté them in oil, they’ll absorb a lot less of it. Instead, the outside edges of the mushrooms will crisp up in the cooking oil. This gives them the ideal texture for adding to my Vegan Shepherd’s Pie filling.

For my root vegetables, I included carrots and parsnips. Carrots, as you well know, have a slightly sweet flavor and are a good source of beta carotene. Are you familiar with parsnips though? Parsnips are one of my favorite vegetables to include in my fall and winter dishes. While they might look like carrots, parsnips are also closely related to parsley. They have a slightly sweet, slightly bitter flavor that adds an earthiness to any dish in which they are included.

And, of course, the highlight of any Shephard’s Pie is the mashed potato topping. As you may know, potatoes come in lots of different varieties. Everything from Russets to Yukon Golds to Red Bliss. For my vegan mashed potatoes, I like to use Yukon Gold potatoes. So what’s the difference?

Different varieties of potatoes contain different amounts of starch. The amount of starch in a potato has a lot to do with whether the potato holds its shape when cooked, like the Red Bliss, or completely falls apart, like the Russet. Yukon Gold potatoes fall in between the Red Bliss and Russets, making them the perfect candidate for creamy mashed potatoes.

Traditional mashed potatoes are made with plenty of butter and cream. However, you can still have creamy mashed potatoes if you’re on a vegan diet. First, as described above, Yukon Gold potatoes develop a creamy texture all on their own when cooked. To get a smooth mash though, they need a little help. So, for these vegan mashed potatoes, I simply swap dairy butter out for a little vegan butter. And the cream? I use coconut milk. Not the watered-down version you find in a carton in the grocery store, but the unsweetened, full fat coconut milk that comes in a can.

All About Savory! How to Make This Vegan Shepherd’s Pie Recipe Rich with Flavor

As you might imagine, traditional Shepherd’s Pie gets a lot of its savoriness from cooked meat. But don’t think that you can get a wonderful flavor in the vegan version. Quite the contrary!

As I mentioned above, mushrooms are one of those vegan-friendly ingredients that are known for their rich umami flavor. Tomatoes, especially as tomato paste, are also known to add richness and depth of flavor. Combine those two ingredients with slow-cooked onions, fresh garlic and a splash of vegan Worcestershire sauce and you’ll be amazed at how good the vegan version of Shepherd’s Pie can taste!

When comfort food calls, you should have this Vegan Shepherd’s Pie Recipe on speed dial. It’s easy to put together, especially if you’re feeding a crowd. This recipe will feed a family of four for two days. Or, have your friends over and dazzle them with your vegan prowess.

What I really love about this recipe though is that you can multi-task. While the potatoes are boiling and the onions are slow-cooking, you can chop your other vegetables and preheat your oven. Active time is about 30 minutes. For the rest, you can put up your feet and scroll through your Instagram account. Be sure to give this Vegan Shepherd’s Pie a like and share it with your friends while you’re at it!

What’s in My Kitchen to Make This Vegan Shepherd’s Pie Recipe Easier?

Etsy (US) Reusable, Upcycled Napkins(opens in a new tab)”

Before you ask… yes, I do have a standing KitchenAid mixer. You might be wondering why a person with a standing mixer would also need a handheld mixer. The answer is pretty simple though — it’s all about effort.

Standing mixers are fantastic for heavy duty projects. Like dough. But they’re not required for every job. Take mashed potatoes for example. They whip up in no time flat. Actually, probably in less time than it takes to set up your standing mixer. For those jobs, I like a simple, easy to clean handheld mixer and that’s exactly what this is. 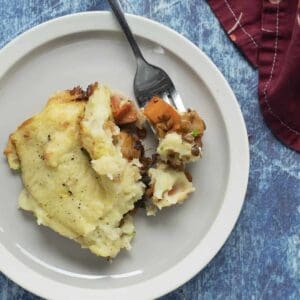 This Vegan Shepherd’s Pie Recipe is an easy way to get your comfort food fix and stay healthy. Made with lentils and plenty of fall-friendly vegetables, this savory vegan version of Shepherd’s Pie is a dinner your whole family will enjoy!
No ratings yet
Print Recipe Pin Recipe
Total Time 1 hr 30 mins
Course Main Course
Cuisine American, British
Servings 8 people