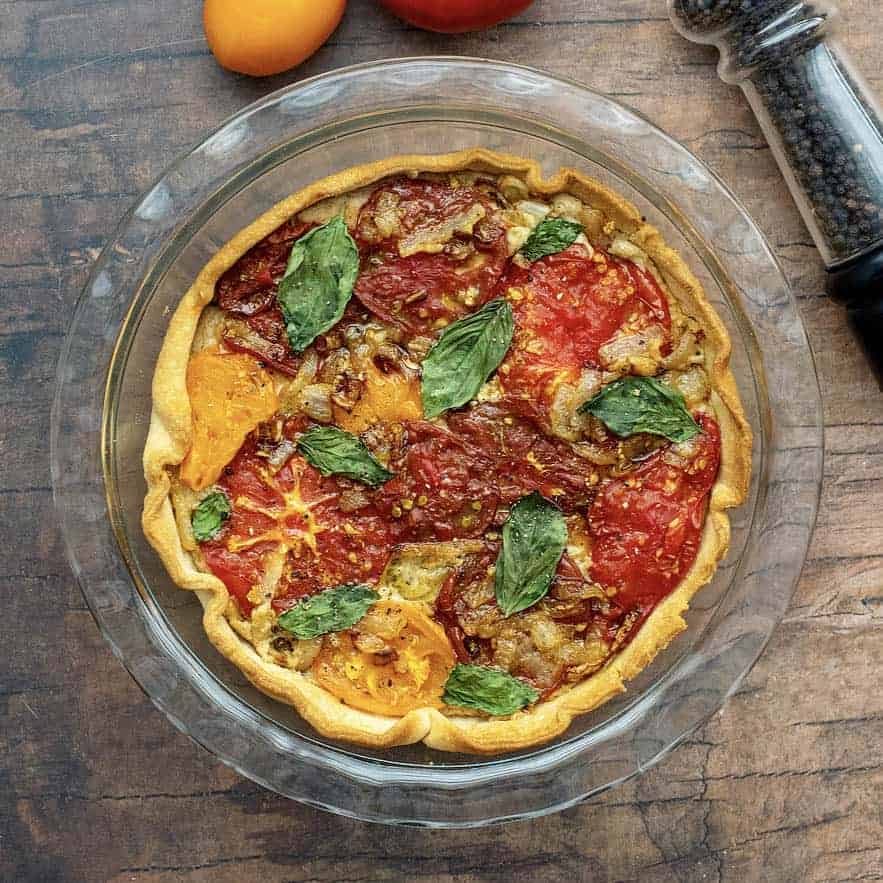 This Vegan Tomato Pie recipe includes affiliate links. When I find a great product or service, I like to share it with my readers. Sometimes I use affiliate links so I can earn commission for my recommendations. Thank you for your support!

Wondering what to do with all those fresh tomatoes this summer? Have you considered tomato pie? And no, I don’t mean the kind that looks like a cheese-less pizza. I mean an actual tomato pie, as in southern tomato pie. This easy vegan tomato pie recipe is every bit as savory as its traditional counterpart, using cashew cream sauce in place of cheese and a flaky, vegan-buttery crust. Fresh tomatoes never had it so good!

What is a Tomato Pie?

A quick google search for tomato pie might lead to some initial confusion. There are Italian tomato pies, which consist of a thick tomato sauce over focaccia bread with some herbs, like oregano. Unlike pizza, Italian tomato pies are typically served at room temperate and without cheese. They’re a popular dish in the Northeastern United States.

The kind of tomato pie that I’m talking about is of the Southern variety. Southern tomato pie features thick-sliced fresh tomatoes and a white cream sauce in a flaky pie crust. It’s the stuff pies dreams are made of.

In accordance with Southern cooking culture, traditional southern tomato pie recipes feature a lot of butter, cheese and heavy cream. This vegan version of tomato pie is quite different in terms of ingredients, but it is as every bit as good!

This dish features a simple homemade dairy-free, vegan pie crust. I love that it gives the dish a rustic look although I think that has more to do with my baking skills than any true intention. Of course, if you’d like to make this easier you can find store-bought pie crusts. No judgment here.

If you decide you’d like to try your hand at vegan baking, here’s a trick I learned making vegan biscuits that I adopted when making pie crusts. Forget cold butter chunks. For these recipes, you want butter to be as cold as possible for as long as possible. Any friction created in the blending process will soften the butter, so you want the process to involve as little motion as possible.  Instead, grate your butter with a cheese grater and then set it in the freezer while you prep your other ingredients. The small pieces make it easier to blend into the pie crust dough and the butter will be stone cold at the start.

Traditional southern tomato pie is made with mayonnaise and a blend of cheeses, usually parmesan. To make this dish vegan, I swapped those ingredients out with my cashew cream sauce – a creamy blend of soaked cashews made even tastier with the addition of salt, garlic, lemon juice and nutritional yeast.

Cashew cream sauce is a popular addition to many of my vegan recipes. I use it in other dishes, like my Vegan Fettuccini Alfredo as well as my Black Bean and Sweet Potato Vegan Enchiladas.   but I’ve found that new vegan cooks often aren’t familiar with them, particularly nutritional yeast. If you’re curious to learn more, check out my Vegu-cation sections: Cooking with Cashews and What is Nutritional Yeast?

The first time I made this tomato pie recipe I used my basic vegan cashew cream sauce recipe. And while it’s a great option for dishes like Vegan Fettuccini Alfredo, it’s a bit runny for vegan tomato pie. After some experimenting, I figured out that adding 2 tbsp of flaxseed meal to the cashew cream sauce thickened it perfectly. Check out this perfectly firm tomato pie slice!

Salting the Tomatoes for Your Tomato Pie

When I make this dish it’s usually because I have come into possession of some gorgeous homegrown tomatoes. This is especially true if they’re a variety of colors, shapes and sizes. These tomatoes typically have a high water content, so it’s important to extract as much water as possible before adding the tomatoes to the pie. To do this, simply slice the tomatoes and lay them out on a piece of parchment paper or a cutting board. Then sprinkle them with about 1 tsp of salt and allow them to rest. After 10-15 minutes, gently pat them dry with paper towels or a clean kitchen towel.

Putting this Tomato Pie Recipe Together

I start by pre-baking my pie crust. This enables a flaky crust and deep, rich roasted tomatoes without drying out the cashew cream sauce. As you will find, cashew cream sauce doesn’t require baking in the same way that cheese does.

When prebaking I use a few cups of dried beans that I have around to ensure that crust won’t fall in on itself. Pre-baking takes 12 minutes and then about 10 minutes of cooling. After that, I pour in my cashew cream sauce into the pre-baked pie crust, layer my tomatoes on top and then add my sautéed onions and garlic. About 20 minutes later, a gorgeous tomato pie comes out of the oven. Just don’t skip allowing the tomato pie to cool slightly at the end. This will give it a firmer texture when serving!

What’s in My Kitchen to Make This Tomato Pie Recipe Easier?

These napkins are upcycled and reusable, allowing you to not only avoid throwing away paper products but to also reuse fabrics – a small but significant way to cut back on water, dyes and chemicals used in the production process. These napkins are so darling (they come in lots of different patterns and colors) and they’re machine washable. I just throw them in with whatever load of laundry I’m doing. They don’t wrinkle easily, so a quick fold will have them back on your table doing what they were meant to do… be reused!

It’s true – a Vitamix is an expensive blender. But, oh! The things it can do and do well. If you’re interested in getting more into vegan cooking, or you just want to eat healthier, then I think that this is a must-have kitchen tool. I use my Vitamix daily for breakfast smoothies and it really gets the job done when making vegan cheeses. There are many versions of the Vitamix on the market. This is the version that I have.

I picked the Hamilton Beach 8-Cup Food Processor. I use my food processor all. the. time. But, for this recipe, I used it to make the pie dough. I like making pie dough in my food processor because it’s a lot easier than trying to make it with a bowl and spoon and, damn, my KitchenAid mixer is really heavy. I only get that out of the cabinet when there are cookies involved.

Love to cook with cast iron? Ever forget how hot those handles get? Yeah, me too. The Ove Glove will help to protect your hands when cooking (and forgetting). These pot holders are heat safe to 540 degrees and two come in a package – one for holding the handle and one for supporting the bottom of your cast iron skillet (because we all know it’s too heavy to pick up with one hand). 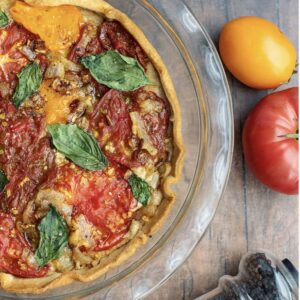 Wondering what to do with all those fresh tomatoes this summer? Have you considered tomato pie? And no, I don’t mean the kind that looks like a cheese-less pizza. I mean an actual tomato pie, as in southern tomato pie. This easy vegan tomato pie recipe is every bit as savory as its traditional counterpart, using cashew cream sauce in place of cheese and a flaky, vegan-buttery crust. Fresh tomatoes never had it so good!
No ratings yet
Print Recipe Pin Recipe
Total Time 1 hr 30 mins
Course Main Course
Cuisine American, Southern
Servings 4 people