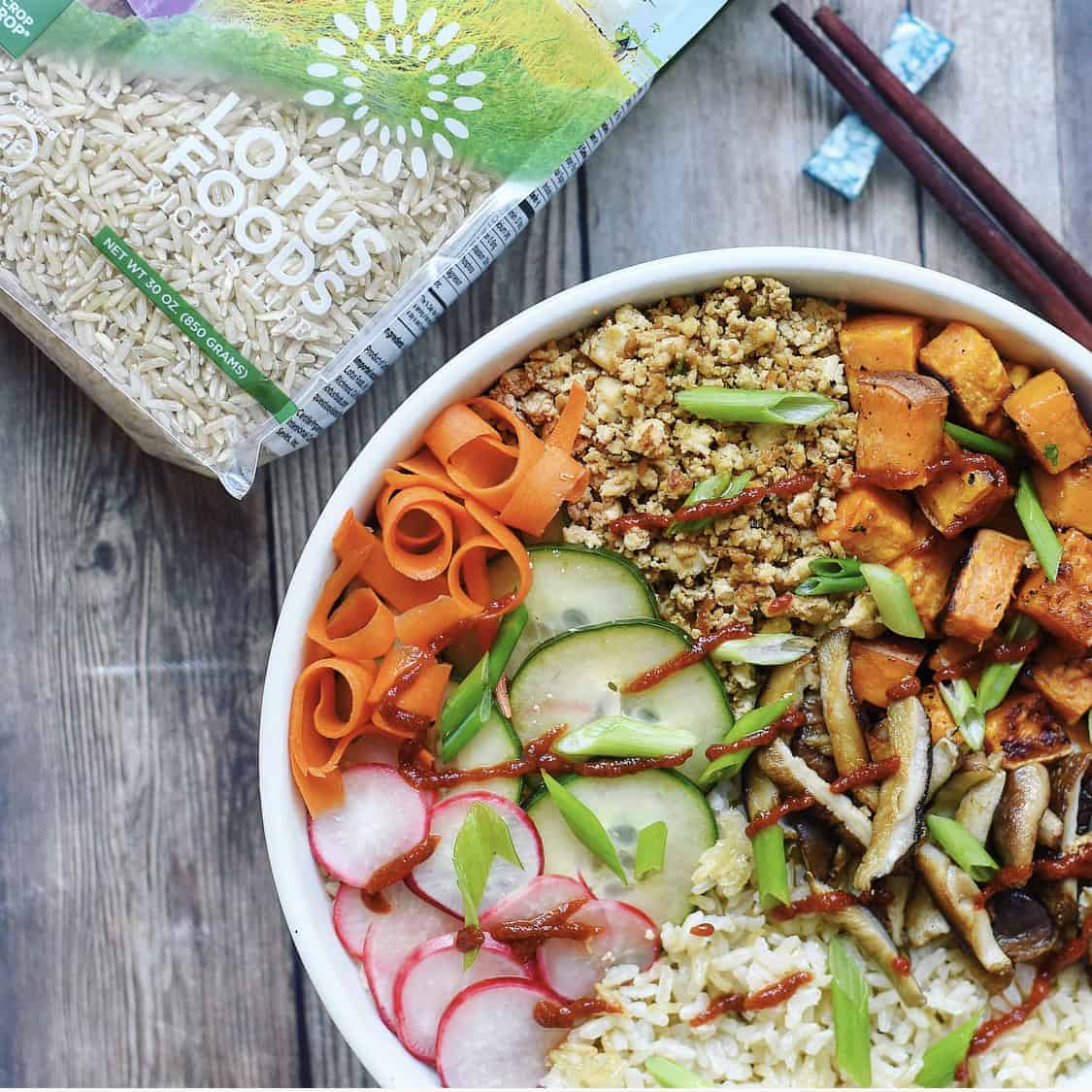 If you haven’t yet tried bibimbap, you’re missing out! Bibimbap, a Korean dish, means mixed ingredients (“bibim”) and rice (“bap”). Here, I’ve created a vegan version using a Korean-marinated tofu crumble and crispy rice. These ingredients are complemented by quick-pickled vegetables, roasted sweet potatoes and sautéed shiitake mushrooms. This vegan dish offers up a ton of flavor. It’s sweet, salty, spicy and a bit tangy with a ton of umami! It’s also a great dish to serve a crowd, offering up great aesthetics and the flexibility for each diner to build their own bowl.

In this blog post, I’ll spend some time talking about bibimbap. There’s a lot of interesting background to this dish. Understanding its place in Korean culture will make you a dazzling dinner party host. True to form, I’ll also include a little bit of food science. Specifically, I’ll be talking about tricks to getting the perfect sautéed shiitakes. This handy food science tip will help you in your preparation of a variety of vegan dinners!

As I mentioned above, bibimbap is a mixture of rice and other ingredients. While it’s usually served in a decorative manner, with colorful ingredients grouped together, bibimbap should be well-mixed before it is eaten.

What Goes into a Bibimbap Bowl?

In Korea, bibimbap is often a way of using up leftovers, so the ingredients from one bibimbap bowl to another vary. Traditionally, however, bibimbap starts with a base of white rice. The rice is then topped with a variety of colorful ingredients. These ingredients may include shiitake mushrooms, julienned carrots, sliced cucumbers, daikon radish, spinach and bean sprouts. It sometimes includes a meat – usually a minced or thinly-sliced beef, as well as a soft-cooked egg (vegetarians like to break the yolk, giving the dish a creamy consistency when mixed). Kimchi is sometimes added as an additional topping. IMHO though, its star ingredient is Gochujang sauce.

Gochujang sauce is a fermented pepper paste, usually made with red chile pepper, glutinous rice, fermented soybeans and salt. (1)  It’s a little sweet, a little tangy, a little salty and a little spicy. Once you try it, you may forget you ever knew sriracha’s name. Seriously though, it’s a great condiment to have around and you shouldn’t feel limited to saving it for bibimbap night. It’s spicy, but deeply rich in umami – a product of the fermented soybeans. Gochujang sauce has grown in popularity in U.S. grocery stores in recent years, so it’s very likely you will be able to find it in the ethic food section of your local store. If not, you can order it online here.

How Bibimbap is Served…with Philosophy on the Side

Earlier on in this blog post, I noted that bibimbap is a great dish to serve to a crowd because of its pleasing aesthetics. I didn’t fully appreciate the significance of this until I started researching for this recipe. Bibimbap, the colors and flavors of the dish, as well as the way it is served – first with the ingredients neatly arranged by color and then with all of the ingredients well combined – is symbolic in Korean culture. The colors and flavors represent the regions of Korea, as well as parts of the body. (2)

Traditionally, bibimbap would include ingredients representing the five cardinal colors, which in turn represented the five material elements and the five essential flavors. (3) The equal distribution of the colors and flavors became a physical representation of the Taoist concept of yin yang, or the idea that all things must be in balance. When applied to a dish like bibimbap, this concept works to provide the body with a balance of healthy ingredients and pleasing flavors – all of which are intermingled just before eating. (4)

Interesting, right? I mean, who doesn’t love a little philosophical discussion at the dinner table?

How Herbivore’s Kitchen Does Bibimbap

I loved the concept of the colorful and symbolic organization of bibimbap toppings, so I wanted my ingredients to represent that as much as possible. Alas, getting the colors exactly right wasn’t possible without the egg (yellow), but I think it all turned out alright. This dish is still wonderfully colorful and flavorful…and vegan.

Bibimbap Starts with the Rice

I started by swapping out traditional white rice for Lotus Food’s® Organic Brown Jasmine Rice. No, it isn’t white (one of the cardinal colors), but it is wonderfully flavorful. Plus, this brand remains one of my favorites. In addition to providing high-quality products, the company has a mission of promoting organic agriculture & rice biodiversity, as well as supporting local rice producers. All things that are near and dear to my heart, because how our food is produced is as important as how it’s prepared. You’ll find their ingredients in many of my recipes, like my Vegan Thai Green Curry Noodle Bowl and my Thai Red Curry Ramen Noodle Bowl – two of my most popular vegan recipes.

Bibimbap is sometimes served in a hot stone bowl, called a dolsat. You may see this dish on menus listed as “Dolsat Bibimbap.” The dolsat continues to cook the rice after the bibimbap is served, creating a bottom layer of crispy rice.  Bliss in a bowl. Unfortunately, I don’t own a dolsat. This is because I have to draw the line with kitchen equipment somewhere and Not. At. All. because you should skip the crispy rice step. I included a method for achieving this wonder of an element in the recipe below.

If you’re in the market for a dolsat though, I found one for you to try.

Forget the Beef…Add a Crispy Korean Tofu Crumble Instead

As I mentioned above, bibimbap often includes a modest amount of meat. This is usually thinly sliced beef, but several recipes I came across included a beef crumble. I liked that idea, thinking that the smaller bits would mix very well into the bowl. I adapted this concept into a crispy tofu crumble, but then took it up 10 notches by cooking the tofu in a Korean marinade. The marinade is sweet, spicy and salty…all the makings of a good bibimbap. I made it using a combination of tamari, maple syrup, sesame oil, garlic and ginger. Totally worth the extra time to prepare.

If you’ve explored my blog before, you know I am very keen of pressing and drying my tofu before cooking it. This makes all the difference in this recipe, so don’t skip this step. Drying the tofu allows it to become crispy in the pan instead of steaming and becoming mushy.

As I’m sure you’re aware, kimchi is a very popular ingredient in Korean cuisine. Kimchi, a combination of fermented vegetables, is often included as a topping for bibimbap. The fermentation process takes time, however, so I opted to add some quick-pickled vegetables to my bibimbap. I can’t say enough about how much this adds to the dish. Remember the five flavor sensations? This one is sour.

I thought this would be another good way to get the sweet flavor sensation into this vegan recipe. This was a simple ingredient to make. I just cubed two sweet potatoes (yams, actually, because I was after that bright orange color), tossed them in a neutral-tasting oil and seasoned them heavily with salt and black pepper. I roasted them in the oven while I prepared the rest of the dish.

And Finally … Some Food Science: How to Sauté Mushrooms

It wouldn’t be an Herbivore’s Kitchen blog post if I didn’t throw a little food science into the mix. If you’re still reading, this is a bonus for you because it will change the way you sauté mushrooms forever.

I love sautéed shiitake mushrooms, but I hate that they’re little oil sponges. If you’ve ever sautéed mushrooms, you know what I am talking about. You add oil, then you add more oil. Then you end up with little oil-bloated mushrooms.

I decided to give this method a try. I washed and dried my shiitakes and divided them into two batches. For the first one, I simmered the mushrooms in a small amount of water for about 3 minutes. Then drained the pan and wiped it dry. I added the simmered mushrooms back to the pan with a 1 T. of toasted sesame oil and sautéed them (without a lot of stirring to encouraging browning) for about 3 minutes. The result was crispy, browned shiitakes with a fair amount of oil remaining in the pan. You can see the results below:

The verdict? If you’d like nicely browned sautéed shiitakes, try simmering them first. It’s a short extra step and it will keep your mushrooms from becoming little oil bombs.

Putting Your Vegan Bibimbap Bowl Together

This recipe is a bit time-consuming, but I did try to organize it to be as efficient as possible. For example, I start with the pickled vegetables so that there is time for the pickling process to take place while the rest of the dish is coming together. The roasted sweet potatoes come next and so on and so forth. I recommend preparing the dish in this way. You can, of course, prep this dish beforehand. The pickled vegetables can be done in advance, as can the sweet potatoes, the tofu crumble and the mushrooms. You can also pre-cook the rice, but I would recommend doing the step to make it crispy just before serving. 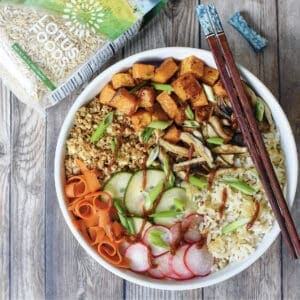 If you haven’t yet tried bibimbap, you’re missing out! Bibimbap, a Korean dish, means mixed ingredients (“bibim”) and rice (“bap”). Here, I’ve created a vegan version using a Korean-marinated tofu crumble and crispy rice. These ingredients are complemented by quick-pickled vegetables, roasted sweet potatoes and sautéed shiitake mushrooms. This vegan dish offers up a ton of flavor. It’s sweet, salty, spicy and a bit tangy with a ton of umami! It’s also a great dish to serve a crowd, offering up great aesthetics and the flexibility for each diner to build their own bowl.
5 from 2 votes
Print Recipe Pin Recipe
Total Time 1 hr 30 mins
Course Main Course
Cuisine Korean
Servings 4 people