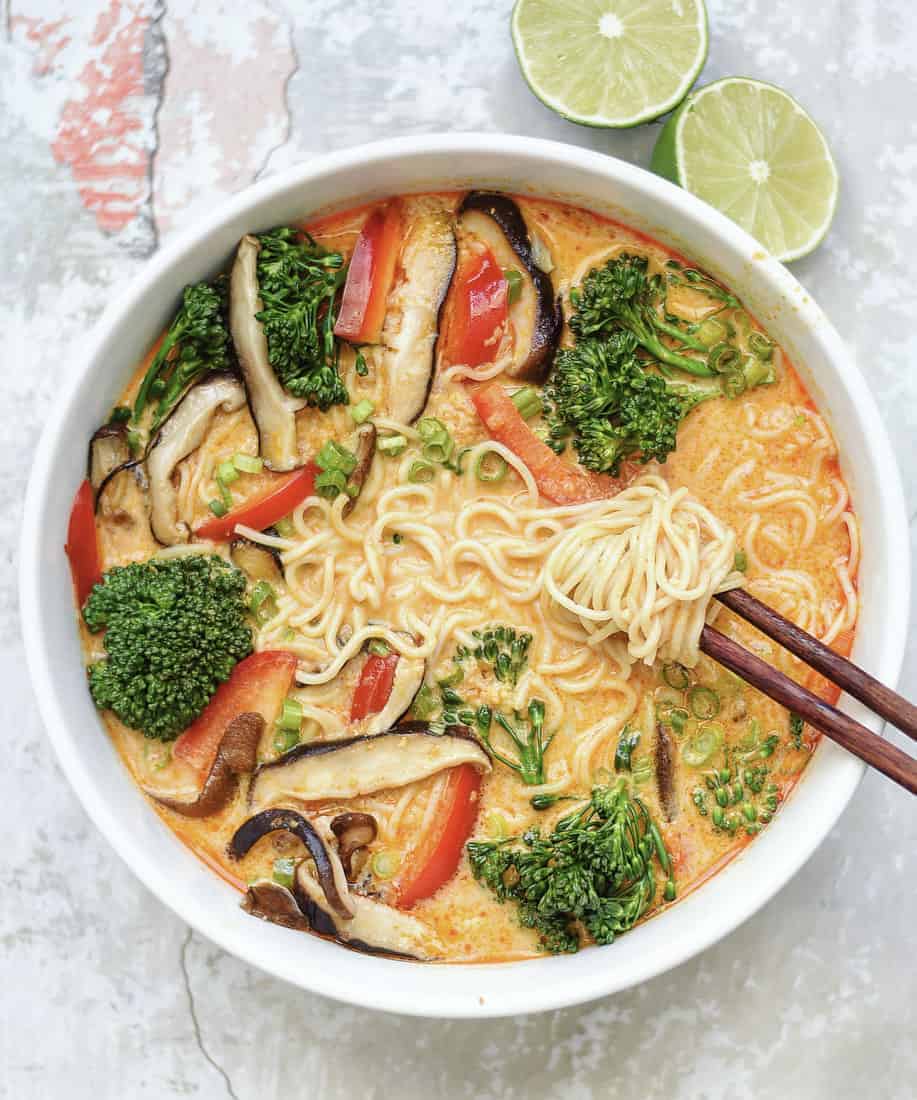 This easy ramen recipe will get vegan comfort food on your table in less than 30 minutes. The thai red curry paste, a twist on this traditional Japanese dish, makes this ramen noodle recipe both savory and spicy. I’ve also loaded it with healthy vegetables and brown rice noodles for a healthy nutritional punch!

A Brief History of My Life with Ramen

Several years ago, I lived in a city where you could find almost any kind of food. Whether you wanted Southern comfort, Ethiopian or Peruvian, there was a place for you. I loved the constant culinary adventure, but when asked, ramen was usually my food of choice.

If you’re not familiar with ramen, it’s a noodle bowl, filled with hot broth and a host of other ingredients that’s sensationally savory. The broth is traditionally made using a beef or chicken stock, seasoned with seaweed and often some other sea life. When served, it was often accompanied by meat and a soft-boiled egg. Needless to say, it was not at all vegan (or vegetarian) friendly and honestly, at that time, neither was I.

I’ve since moved away from the urban “whatever your heart desires” restaurant scene. And I’ve also changed up my diet. The combination of the two pretty much took ramen as dining out option right off my list. And so, I did what any fully motivated, self-proclaimed foodie would do – I learned to make it myself. Complete with all of my own culinary twists and turns.

Not So Traditional Ramen Noodle Recipe

This recipe could have just as easily been called Thai Red Curry Soup because its similarities to traditional ramen noodle soup start with the noodles and end there. And, actually, that isn’t even really true. I used Lotus Food’s® Millet and Brown Rice ramen noodles, which aren’t traditional either (ramen noodles are traditionally made with wheat flour). But, as I said above, I really miss ramen and this ramen noodle recipe gives me all of the same feels of the ramen of my past, so I decided on the former title and not the latter.

So why should you keep reading?

Seriously, look at the picture! This ramen soup recipe is really, really tasty. It’s spicy and creamy, filled with vegetables and slurps incredibly well in the traditional style. Do you need more incentive? It’s also a super easy vegan recipe. Like, you’ll have it on the table in 30 minutes kind of easy.

An Easy Vegan Recipe? I Thought That Was a Myth?

Easy vegan recipes exist. They really do. But, it’s also true that eating vegan can involve a lot of prep work. I often hear from people that the prep time is their biggest deterrent.

Don’t worry though! While I love dilly-dallying around in my kitchen some nights, on others I really just want to get dinner on the table. So, I’ve worked out a series of vegan recipes that are easy. Thirty minutes or less. With ingredients that you can find. And while you may be thinking that you’ll never find all the ingredients to make a Thai/Japanese/Chinese inspired vegan soup at your local grocery store, I think you’ll be surprised. Most stores now have (albeit sometimes small) ethnic food section. In there, you should be able to find what you need.

And, here’s what you’ll need (at least those items that you might be unfamiliar with): 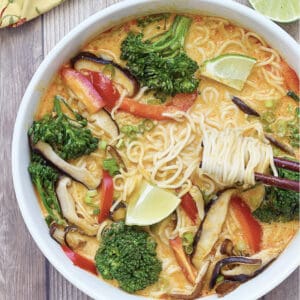 I like to use rice ramen noodles. I don’t like to cook these in the broth though, because I find that they become mushy when overcooked. I make them al dente separately and add them to the bottom of the bowl just before I am serving. I then pour the broth over them.
Keyword easy ramen recipe, mushroom ramen, ramen noodle recipe, ramen recipe, ramen soup, vegan ramen recipe, vegan soup, vegan soup recipe
Tried this recipe?Let us know how it was!
Pin23K
Share98
Tweet
Email
Yum1K
24K Shares
Vegan Stuffed Shells
Easy Vegan Miso Soup