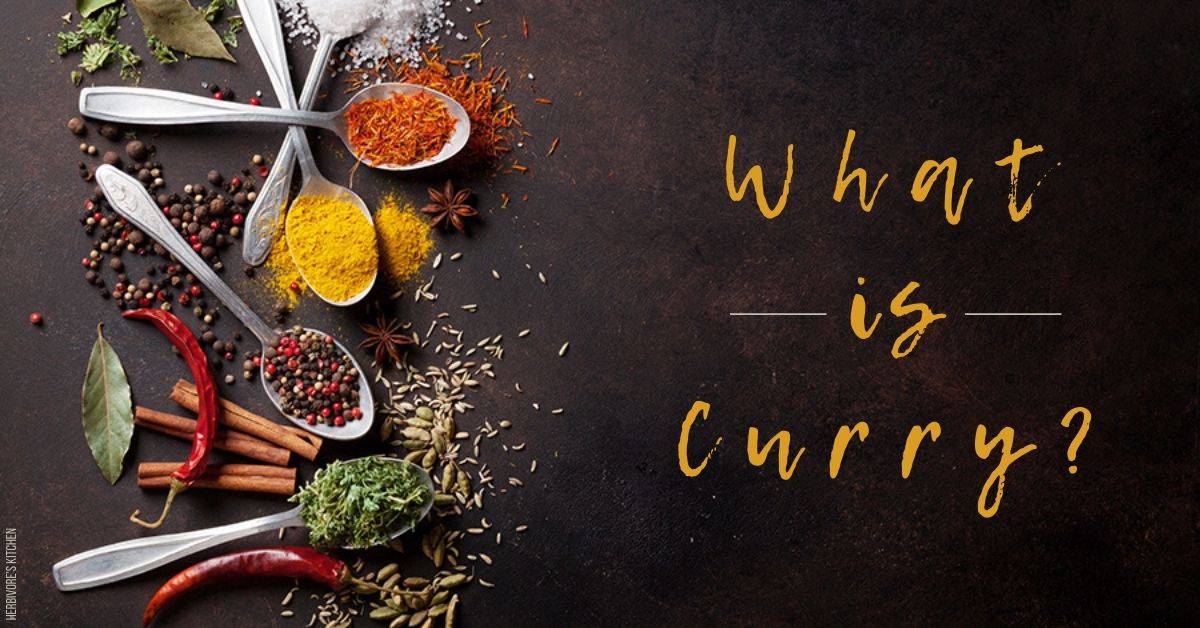 This What is Curry post includes affiliate links. When I find a great product or service, I like to share it with my readers. Sometimes I use affiliate links so I can earn commission for my recommendations. Thank you for your support!

Plenty of people ask the question – what is curry exactly? These recipes are popular throughout the world, but you’ll most often see Indian recipes and Thai recipes populating your Instagram feed. So, let’s take a crack at answering the question and see if I can’t inspire you with some easy, healthy recipes along the way.

I have to admit that curry took me a little while to get the hang of. I’m a small town, mid-westerner by birth and I’m sure my first exposure to this cuisine happened some time in my twenties.

After I started taking animal products out of my diet, finding flavor in herbs and spices became a focus and eating at home became a necessity. Curry is a win-win in both departments: it’s wonderfully flavorful and very easily adaptable to a vegan diet. It is an education though, and like I’m prone to do, I wanted to learn a lot about it so that I could expand my recipes to include healthy, easy vegan dishes to share with you all.

Cooking Lesson: What is Curry?

If you’ve been exploring vegan cooking for a while, you’ve probably noticed a lot of dishes called curries. Red, green, curry paste, curry powder… but what does it all mean? I thought that finding a definition would be an easy task, but it turns out it’s not. Even the Wikipedia definition (usually a good place to start) left me scratching my head. There’s a reason for this and it’s because curry has become a generalized description of dishes from a variety of cultures, each with their own spices and cooking styles.

Curry has its roots in Southeast Asia. The word itself is derived from word “kaṟi” from the Tamil language, the official language of India, Sri Lanka and Singapore. Kaṟi translates to “sauce” or “relish for rice.” I love that – relish for rice. So much yum, right?

A thick sauce is the trademark of a wet curry, while dry curries are cooked with very little liquid. The list of spices from dish to dish varies from region to region with some dishes being mild and sweet, some hot and spicy and others creamy and tangy. So, if you think “Indian food” and fragrant spices like coriander, cumin and turmeric when someone says “let’s go out for curry” you’re not wrong, but you’re not necessarily right. It is a much broader concept.

Some Insight into Indian Curry

Westerners are most likely to recognize Indian curries. Popular dishes like vindaloo, madras, tikka masala and korma are all curries. Vindaloo is a hot and sour curry, featuring black pepper, red and green chili, vinegar and tamarind, whereas tikka masala is a mild tomato-based sauce featuring cumin and coconut cream. Madras curry, like vindaloo, is a good option if you’re into spice. My favorite perhaps is korma which features the mild flavors of paprika, turmeric and cardamom.

Indian recipes are often dry curries, meaning that the finished dish doesn’t have a lot of liquid. This is largely because Indian dishes use curry powder – a dry blend of spices — rather than curry paste which is a mash of fresh ingredients. Basmati rice — a long grain rice that has a dry texture and smells a bit like popcorn — is served with Indian curries.

A Note on Garam Masala

Garam masala has always been a bit confusing for me. I’ve always likened it to a curry powder, but it’s actually quite different. Whereas powders often feature turmeric, cumin, coriander and fenugreek, garam masala includes cloves, cinnamon and cardamom, garam masala is usually added at the end of a recipe as additional seasoning.

Curries are also popular dishes in Thai cuisine. Thai recipes are often more like a soup than traditional Indian recipes, using a paste rather than a powder. Like Indian curries, Thai curries may be served over rice (usually Jasmine rice) but are also served over rice noodles, an ingredient that would not be found in an Indian recipes.

Thai curries are usually described as red, yellow and green curries, each with their own specific list of ingredients. Red is usually spicy using red chili peppers. Yellow curry’s defining ingredient is turmeric, which gives it its color. Green features cilantro, kaffir lime and basil. Lemongrass, ginger, garlic and shallots round out green curry’s flavor profile.

Massaman curry and Panang curry are other dishes you might come across on your local Thai restaurant’s menu. Massaman curry has a Malaysian influence and is distinguished from other Thai curries by cinnamon, cloves and nutmeg and the inclusion of peanuts. If you’re looking for heat, then think Panang curry. Featuring red chilies, this spicy dish is typically served with rice and includes galangal (Thai ginger), lemongrass, kaffir lime, coriander, cumin, garlic, shallots and peanuts among its ingredients.

The Japanese Eat Curry as Well

You can also find curries in Japan. Perhaps the most popular dish being Katsu Curry (Katsukarē). It adapts well to a vegan diet as tofu easily replaces the panko-crusted chicken or pork in traditional Katsu Curry dishes. It is a bit sweeter and less spicy than Indian curry. Japanese curries includes turmeric, coriander, fenugreek, cumin, pepper, cinnamon, ginger, star anise, cloves and nutmeg.

What is Curry? Does It Fit a Vegan Diet?

The answer is a definitive yes! Flavored loaded, curries adapt really well to a vegan diet. Indian curries often use ghee in their preparation, but you can easily substitute that out with a vegan alternative. Thai curries are often dairy free, using coconut milk. If you’ve been cooking vegan meals for a while, then you know all about swapping a meat main out with lentils, chickpeas or vegetables. In fact, one of my favorite dishes is a Cauliflower & Sweet Potato Vindaloo!

Here are some of my vegan curry creations to get you started: