This Louisiana Vegan Gumbo: This Plant Based Gumbo Soup is One of My Favorite Recipes with Vegan Sausage post includes affiliate links. When I find a great product or service, I like to share it with my readers. Sometimes I use affiliate links so I can earn a commission for my recommendations. Thank you for your support!

Louisiana Vegan Gumbo: This Plant Based Gumbo Soup is One of My Favorite Recipes with Vegan Sausage

As I was developing this Louisiana Vegan Gumbo recipe, I got to thinking about my style of vegan cooking. For some food bloggers, their niche comes through quite clearly. Some of them are vegan bakers or they specialize in vegan recipes that take 30 minutes or less. Some have established themselves as experts in Asian-themed vegan dishes, while others’ style is the ever-popular vegan bowl.

As I thought about all of the food blogger friends, I realized that I don’t fall squarely into any of these categories. Sometimes my recipes are quick and easy; sometimes they’re designed to have you idling around in the kitchen all day. I make French vegan dishes as often as I make Mexican vegan fare. Sometimes I dabble in vegan baking and have recently taken up vegan chocolatiering. It made me start to wonder… is it bad that I don’t have a niche?

I’ve been mulling it over the past few days and I’ve decided that it isn’t bad at all. It’s great. And I do have a niche… it’s called the whatever-I-have-time-for-and-whatever-I’m-in-the-mood-for-vegan-recipes. And, lucky for all of you wanting some Southern vegan food, I had a free afternoon and a hankering for Louisiana Vegan Gumbo earlier this week. So, let’s talk about this spicy vegan gumbo recipe with vegan sausage!

But first… some quick background: what is gumbo anyway?

Gumbo soup hails from the State of Louisiana. In fact, it’s the State’s official dish. It features a thick, stew-like broth with onions, celery, bell pepper, and tomatoes. Traditional gumbo recipes often include seafood (like shrimp or crab) and Andouille-style sausage. Okra, a southern icon, helps to thicken the gumbo soup while Creole-style seasoning gives it its unique flavor.

How to Make Louisiana Vegan Gumbo

Given the description above, you might be wondering how it’s possible to make gumbo vegan. After all, seafood and sausage don’t have easy vegan substitutions. In addition, gumbo gets a lot of its flavor from animal products like bacon and butter. So, what’s a vegan to do?

As you’ll see, I’ve got some great ways to adapt a traditional gumbo recipe to a vegan diet. They’re all homemade with ingredients that you’ll recognize – no commercially produced fake meats here! In fact, my vegan sausage substitute is packed with protein-heavy, healthy ingredients like kidney beans and walnuts.

All great gumbo recipes start with a roux. If you’re not familiar with it, the word roux means browned butter in French. Roux is made by combining flour and fat and cooking it to a desired darkness. The darker the roux, the more flavor added to the dish. Roux also thickens the gumbo soup into a rich, stew-like consistency.

Making a roux requires patience, especially if you’re after a dark roux. This Louisiana Vegan Gumbo calls for a dark roux, which requires whisking the fat/flour combination for 20-ish minutes. I know that sounds like a lot of work. And it is. But, while a cornstarch slurry would get the job of thickening this gumbo soup done more quickly, it wouldn’t give you the rich, nutty flavor of a well-cooked roux.

In French cooking, roux is made with butter and flour, but in Creole cooking butter is often swapped out for bacon fat. For this recipe, I wanted to honor the flavor of using bacon fat, so I got a little clever with the ingredients I add to this vegan gumbo after the roux was made. The roux itself though, is made using a nut-based vegan butter and flour.

Be patient! Roux takes time, but don’t try to speed it up by increasing the heat. Keep the burner on low and whisk the roux frequently. Burning the flour will cause your gumbo to taste bitter.

To get that salty, smoky bacon flavor into my roux, I add a simple mixture of tamari, maple syrup, balsamic vinegar and smoked paprika just after the roux is complete. I find that these ingredients leave the same hints of flavor that cooking roux in bacon fat would render.

A Vegan Sausage Recipe for this Louisiana Vegan Gumbo

Coming up with a vegan sausage recipe for this Louisiana Vegan Gumbo was one of my favorite parts of developing this recipe. I’ve long made a vegan chorizo that I keep on hand for breakfast burritos and vegan pizza toppings. All it took to make this a suitable Andouille sausage substitute was to tweak the ingredients slightly.

If you’re not familiar with Andouille sausage, it is a particular variety of sausage that hails from France. It’s popular in Creole cooking and features a variety of spices native to these cultures and cuisines (think: black pepper, cayenne pepper, thyme, paprika and allspice).

Andouille sausage is made using pork butt, but my vegan andouille sausage substitute uses kidney beans, sun-dried tomatoes and walnuts are its primary ingredients. These ingredients are combined with garlic, onion, panko breadcrumbs and a bit of flaxseed meal as a binding agent to form a thick mixture that is then rolled into meatballs and baked in the oven.

In its traditional preparation, sausage ingredients are packed into a casing which helps hold the sausage its form when cooked. I decided to skip this step and push this vegan sausage recipe into more of a vegan sausage meatball direction. So, in an effort to manage expectations, you should know that the texture of these vegan meatballs will be considerably softer than traditional sausage.

Okra, like Andouille sausage, is a key ingredient in traditional gumbo soup recipes. Okra is a long, slender seed pod that is commonly featured in Southern cooking. Like tomatoes, okra is actually a fruit that is regarded as a vegetable by most. Fresh okra may be found in season in some areas but given my location, I rely on frozen okra.

Frozen okra comes pre-sliced into ½” thick discs. I add these directly to my gumbo at the same time that I add the onions, bell peppers and celery. Okra is mild in flavor, offering up a crunch when uncooked, but is rendered tender when cooked.

How Do You Cook Orka?

Okra contains a mucilage, a gelatinous substance found in some plant seeds, that is released when okra is cooked. This substance helps to give gumbo soup a thick consistency and you won’t notice it independently in the gumbo, but if you decide you love okra and decide to try other preparations, this hidden truth of okra may catch you by surprise.

How to Serve Louisiana Vegan Gumbo with Vegan Sausage

This Louisiana Vegan Gumbo has so much flavor that it really doesn’t need much else. I serve it over long grain white rice with a splash of Tobasco® sauce and some sliced scallions. Traditional gumbo is finished with filé powder, a fine powder made of ground sassafras leaves. It’s a specialty ingredient in most markets, so don’t feel like you need to seek it out to make gumbo. But, if you want a more authentic experience, you can buy it online.

What Kind of Rice Should I Serve with Louisiana Vegan Gumbo?

Gumbo soup is commonly served over rice. But did you know that there is a wide variety of rice types to choose from? Some are distinct and chewy, others are soft and sticky. So which variety is best for this Louisiana Vegan Gumbo? If you haven’t spent a lot of time thinking about rice, here’s a quick primer:

Do you love this Louisiana Vegan Gumbo? Then be sure to try some of my other vegan comfort food recipes! If you’re looking for traditional American fare, I have a Vegan Beef Stew that will surprise you with its rich flavor. French vegan more to your liking, then my Vegan Cassoulet is the ultimate in vegan comfort food!

This vegan beef stew recipe is reminiscent of traditional beef stew with a thick, rich sauce and plenty of tender vegetables. It’s hearty and healthy and makes getting a tasty vegan dinner on the table easy!

What’s in My Kitchen to Make This Louisiana Vegan Gumbo Easier?

I picked the Hamilton Beach 8-Cup Food Processor. I use my food processor all. the. time. But, for this recipe, I used it to make the pizza dough. I like making pizza dough in my food processor because it’s a lot easier than trying to make it with a bowl and spoon and, damn, my KitchenAid mixer is really heavy. I only get that out of the cabinet when there are cookies involved. 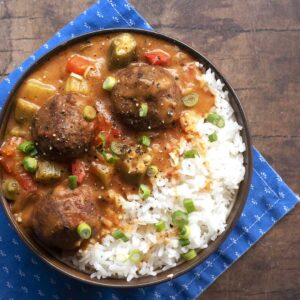