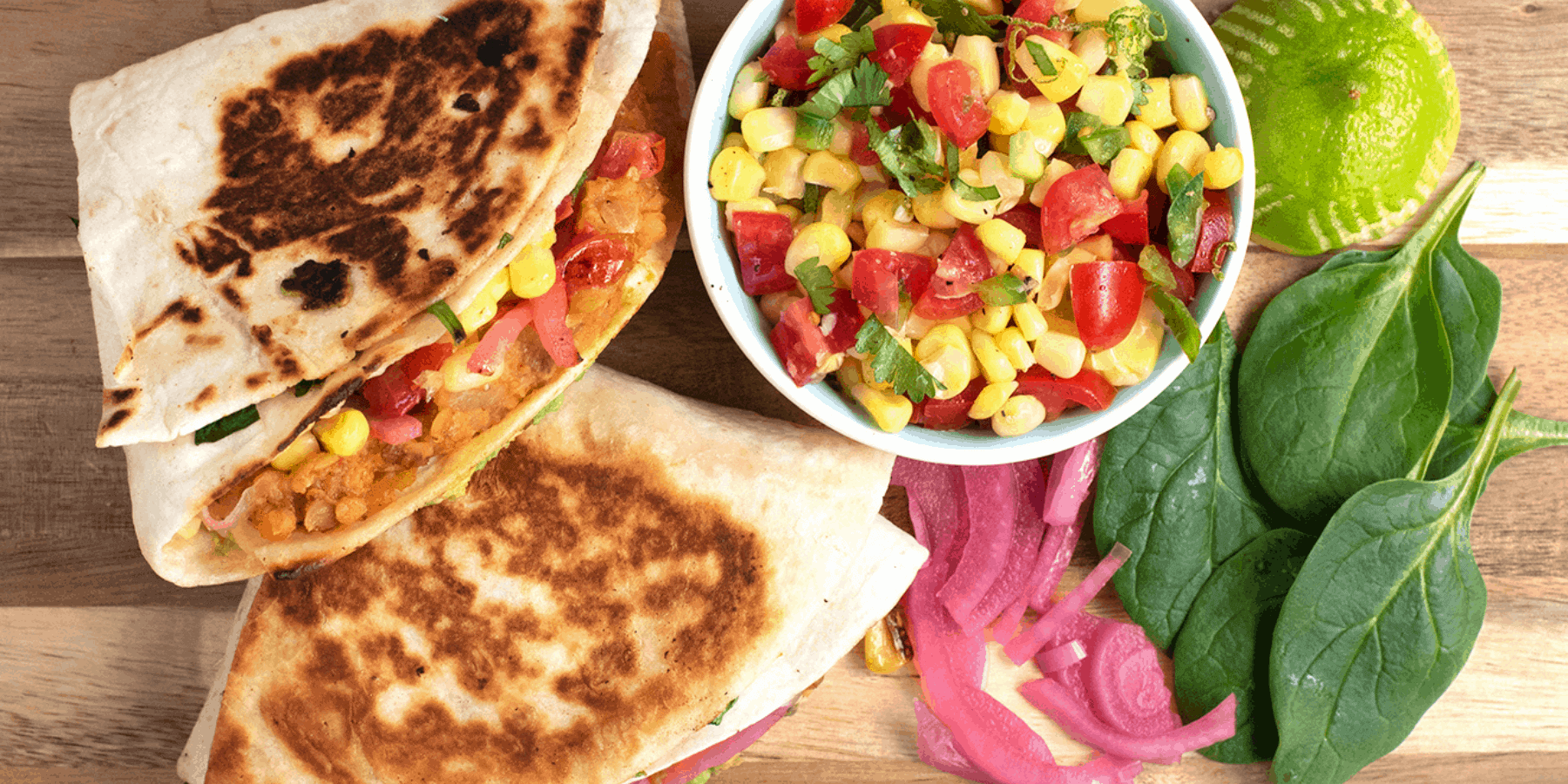 This Vegan Crunchwrap Supreme, Trifold Tortilla or Tortilla Hack: Whatever You Call It, It’s One of My Favorite Vegan Red Lentil Recipes! post includes affiliate links. When I find a great product or service, I like to share it with my readers. Sometimes I use affiliate links so I can earn a commission for my recommendations. Thank you for your support!

Vegan Crunchwrap Supreme, Trifold Tortilla or Tortilla Hack: Whatever You Call It, It’s One of My Favorite Vegan Red Lentil Recipes!

I don’t eat beef and I haven’t had sour cream in a long time, but I can totally understand why people are going nuts over this trifold tortilla thing. Regardless of its fillings, the crunchwrap supreme has one thing we all want – a panini-style casing. I mean, who does not love a toasted quesadilla? It’s both crispy and soft in all the right places!

Vegan Crunchwrap Supreme Recipe: My Own Take on the Tortilla Hack

If you’re new to plant-based cooking and eating, I’m sure you’re first reaction to a vegan crunchwrap supreme recipe is one of skepticism. I see that raised eyebrow. Bear with me though, because I’m about to show you what’s behind the curtain of a seriously good vegan recipe.

How to Fill the Four Quadrants of a Vegan Crunchwrap Supreme

Let’s be honest: a crunchwrap is really just a cleverly folded quesadilla finished with a quick toast in a hot pan. Yet, there’s something about this architecture that really speaks to human taste buds. If you’re not familiar with trifold tortilla technique, here’s a quick introduction:

Working counter-clockwise, fill each of the four quadrants with a different crunchwrap ingredient.

Once the four quadrants are filled, start with the first quadrant and fold it up over the second quandrant. Then the second over the third and the third over the fourth.

Now put that gorgeous cousin to the quesadilla in a hot frying pan and toast the exterior.

Be smart about filling your quadrants. I like to put the softest crunchwrap ingredients in the first and fourth quadrants. This helps the crunchwrap stay together!

My Spicy Red Lentils recipe has been with me for a long time. In fact, it’s probably the recipe that made me first realize that a plant-based diet was not only doable, but delicious! It’s this same simple vegan recipe that replaces the ground beef in Taco Bell’s Crunchwrap Supreme.

If you’re new to lentils, don’t worry, I’ve got you covered. You can read ALL about them in my How to Cook Lentils: Protein for Vegans post. For those of you that just want to get to the Vegan Crunchwrap Supreme recipe already, here’s a quick primer:

For the second quadrant of this Vegan Crunchwrap Supreme recipe, I like to tantalize the taste buds with a really simple, but really delicious corn salsa. This quick salsa recipe includes frozen sweet corn, diced tomatoes, lime zest, lime juice, jalapenos and a little salt and pepper.

And in this quadrant of the trifold tortilla, we have… avocado mash!

If you thought that the second quadrant was involved, you can rest easy. This third quadrant of this vegan crunchwrap is simple. It’s just a mashed-up avocado with a dash of hot sauce. I’m sure that you have your hot sauce preferences, but if you happen to be in the market, I recommend Yellowbird’s Original Habanero hot sauce.

This may seem to fly in the face of a tortilla hack (after all, aren’t hacks supposed to make things easier?), but having roasted sweet potatoes on hand at all times makes it fast and easy.

I know, I know… you’re thinking Really? But roasted sweet potatoes are a staple in my house. I throw them in soups and add them to enchiladas; they’re amazing in both green and red curry dishes. So, don’t be afraid to keep a container of them at-the-ready. Once you get used to having them around, you’ll eat them all the time!

This addition is a simple hash of roasted sweet potatoes and baby spinach. I give the spinach a headstart on wilting my zapping a handful of it in the microwave for 20 seconds. This keeps the nutrients intact but gives it a softer texture. If you like the crunch, by all means add it raw!

Now For the Tortilla Hack: How to Fold a Trifold Tortilla

I gave you the written description above, but everyone loves a good visual. In this short clip, you see how I fill each of the four quadrants of my trifold tortilla and then fold it up to quickly grill it. I do this in a hot frying pan, but my husband prefers to use our waffle iron which, for him, doubles as a panini press.

Do You Love This Vegan Crunchwrap Supreme Recipe?

If you love this Vegan Crunchwrap Supreme recipe, be sure to check out some of my other yummy eat-with-your-hands vegan recipes. These plant-based treats are great for game day snacks or vegan lunches!

Looking for the ultimate vegan comfort food? These Baked Cauliflower Buffalo Wings are sure to hit the spot, whether you’re prepping pre-game food or just having Friday-night wing night.

Are you a hummus fan? You know, that creamy Mediterranean dip that tastes as good being eaten off a spoon as it does smeared on falafel with a side of Greek olives and tabouli? Next time try something a little different with this Navy Bean Hummus! It’s every bit as good and maybe, just maybe, a bit creamier!

Looking for the best vegan nacho cheese recipe? This cashew-based vegan nacho cheese sauce is truly epic! It’s easy to make, full of flavor and packed with healthy, familiar ingredients. It’s the perfect topping for vegan nachos, vegan enchiladas or as a dip for homemade soft pretzels or French fries!

What’s in My Kitchen to Make This Vegan Crunchwrap Supreme Recipe Easier?

A waffle iron is a kitchen gadget splurge for sure! As far as I am aware though, you can’t really make waffles without a waffle iron.

This waffle iron justifies itself, also coming with pancake plates. This easy set up makes the perfect pancakes (and waffles) every time.

Did someone say burrito? That’s right! My family will often drag out this waffle maker and use it to grill their burritos panini-style. I’ve also used to it make mess-free latkes. How’s that for a kitchen gadget that keeps on giving? 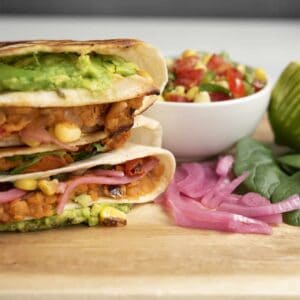 It helps to microwave the flour tortillas for 20 seconds before starting to fill them. They’re more pliable when they are warm and less likely to tear.
Keyword corn salsa, easy quick pickled red onions, red lentils, sweet potato hash, toasted quesadilla, tortilla hack, trifold tortilla, vegan crunchwrap
Tried this recipe?Let us know how it was!