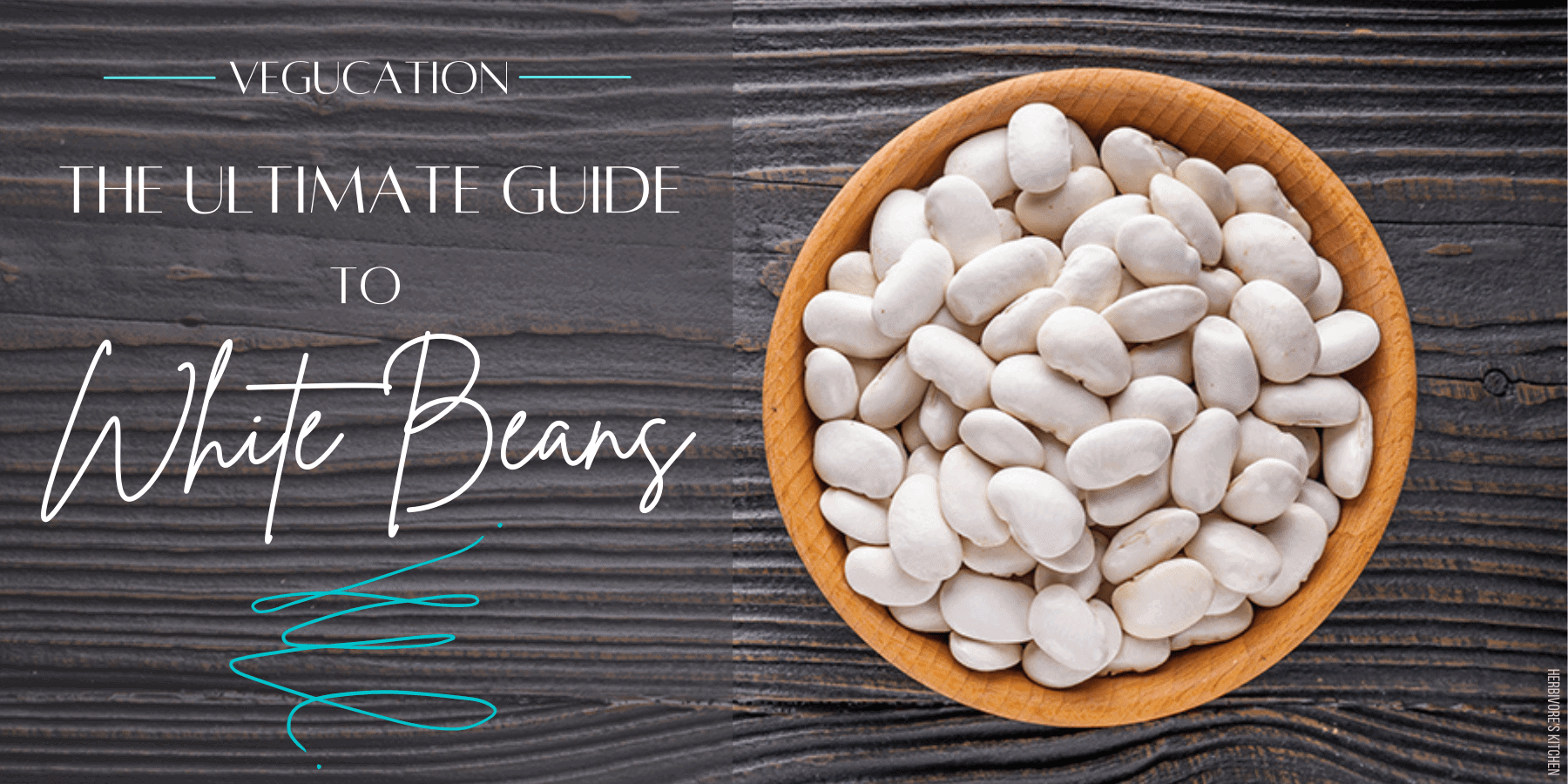 This White Beans: The Ultimate Guide to Great Northern, Navy, Lima and Cannellini Beans post includes affiliate links. When I find a great product or service, I like to share it with my readers. Sometimes I use affiliate links so I can earn a commission for my recommendations. Thank you for your support!

Let’s talk legumes, shall we? And, more specifically, let’s get down to the nitty gritty on one of my favorite vegan ingredients: white beans. This bean category is filled with healthy options for some really tasty vegan recipes! Things like Vegan Cassoulet, Vegan White Bean Soup and rich and savory Kale & White Bean Ragu!

So… What Are the Best White Beans?

This depends on what you’re making! As white beans vary, different types of white beans are better suited for different cuisines. For example, you’re more likely to find Great Northern Beans in heartier French dishes like Vegan Cassoulet. Navy Beans, on the other hand, get soft and creamy when cooked, making them the perfect white bean for one of my favorite vegan appetizers: White Bean Hummus.

While I get down to the details in the following sections, I thought it might be helpful to provide you with this White Bean Cheat Sheet to use as a quick reference guide when cooking with white beans.

Navy Beans (aka Pea Beans or Small White Beans): Could White Beans Be Any More Confusing?

Navy Beans are the smallest of the beans discussed in today’s blog post. They’re about the size of a pea, which is why they’re sometimes referred to as Pea Beans. Unlike their name suggests, Navy Beans are not navy in color. The name “Navy Beans” is instead derived from their status as a former staple food for the U.S. Navy. To avoid confusion (as if…) Navy Beans / Pea Beans are sometimes also referred to as Small White Beans. So, if you come across a recipe calling for Small White Beans, it most likely means Navy Beans.

Whatever you call them, Navy Beans are worth adding to your grocery list. When cooked, Navy Beans become quite creamy so they’re a great candidate for vegan dips and sauces. Because they lose their structure, they’re also a healthy means of thickening soups.

Great Northern Beans: The Meatiest of the Bunch

Great Northern Beans are the meatiest of the beans in this bunch. Unlike Navy Beans, Great Northern beans retain their shape when they’re cooked, making them an excellent candidate for white bean soups and stews or — my own personal favorite – Vegan Cassoulet.

Great Northern Beans have a mild, nutty flavor. They’re a medium-sized bean, so they’re cook time is slightly longer than Navy Beans. They’re excellent at absorbing liquids, so I like using them when I am making bolder dishes with flavorful broths and sauces. One of my favorite soups is my Great Northern Bean Soup. This slow-cooker soup comes out so thick and creamy, you’ll be hard-pressed to convince someone that it’s dairy-free.

Cannellini Beans: The Biggest White Bean of the Bunch

Cannellini Beans are the biggest beans among the white beans that we’re discussing today. Like Great Northern Beans, Cannellini Beans have a meaty texture and maintain their structure when cooked. Their skins tend to be a little thicker, making them great candidates for soups and stews where you want wholly identifiable white beans.

Cannellini Beans are also referred to as White Kidney Beans, a clue to their shape. Cannellini Beans are mild in flavor, with a light, nutty taste. They’re probably the most beloved bean among home chefs, as they’re the typically featured bean in the ever-popular Minestrone Soup.

Lima Beans: The Most Confusing White Bean of Them All

The question: what are Lima Beans? is a little complicated. There are Lima Beans, Baby Lima Beans and the more tempting of monikers – Butter Beans. These classifications all refer to the same bean, but geography dictates what they’re called. If you’re from the South or the UK, you likely call them Butter Beans, while the rest of the world has settled on calling them Lima Beans. Well… sort of.

As they’re name would suggest, slow-cooked Baby Lima Beans / Butter Beans become soft and creamy. They’re most commonly cooked in flavorful broths and served as a side dish.

One of the biggest challenges to cooking with dried beans is timing. Dried beans cook best when they’re soaked in water for at least 8 hours. Soaking dried beans significantly decreases the beans’ cook times.

Some argue that soaking beans prevents them from causing, ahem, unpleasant flatulence. This process is sometimes referred to as degassing your beans. Team de-gassers suggests that pre-soaking beans helps to remove certain sugars in the beans that aren’t easily digested. Those sugars then start to ferment when they hit the lower digestive system and then… well, you know the rest.

The de-gassing theory seems to have been both debunked and proven many times over, so whether this practice works remains a bit of a mystery. The good news though? According to the Cleveland Clinic, the more regularly you eat beans the more quickly your body will adjust to digesting them making any gastro-intestinal distress a short-term problem.

Soaking Beans in a Brine Solution

If soaking beans is good, soaking dried beans in a brine solution is great! Adding salt to the beans’ soaking water helps to soften the beans’ skins – making for a more palatable texture overall. It also helps to prevent the beans splitting and shedding their skins. Cooks’ Illustrated recommends combining 3 tbsp of salt and 4 quarts of cold water to soak 1 pound of dried beans.

Should You Discard the Bean Soaking Water?

My research shows that opinions on this are mixed. Some experts say to use the soaking water in your recipe as it will help to retain some of the flavors and colors form the original beans.

Team de-gassers say the opposite. After all, the whole point of soaking the beans was to remove the sugars that later cause gas, so why would you then use that water to cook. An excellent point, I think. I always discard my soaking water, then rinse the soaked beans before cooking with them.

There is a general rule of thumb that plant-based eaters are taught to follow. The rule is: the more colorful the food, the more likely it is to be healthy. This very broad approach is meant to teach new plant-based eaters that white flour products generally provide very few health benefits. And this rule works in many cases. For example, vegan ingredients like broccoli, purple cabbage, blueberries and beets all follow this rule.

Despite their bland coloring, white beans are not devoid of healthy benefits. Quite the contrary in fact. White beans are packed with protein and fiber, as well as several vitamins and minerals. In particular, white beans are high in copper, iron and folate.

Why should you care about copper, iron and folate? Well, these vitamins and minerals assist your body in producing energy and maintaining your metabolism. They also assist in supplying oxygen throughout your body through your bloodstream. White beans are also high in antioxidants, which help your body to repair oxidative stress.

When I sought out to answer this question, I thought it would be an easy task. As it turns out, it’s not at all. In fact, I’m still not sure I have a clear-cut answer.

My hypothesis was the dried white beans would be superior to canned white beans, but there are convincing arguments that contradict that. Perhaps the most persuasive argument being that canned beans are subject to higher scrutiny when packaged. That is, the ugly beans don’t make it into the can. The counter-argument is that dried beans ultimately add more flavor to a dish as they require longer cooking times.

Personally, I use both canned beans and dried beans. Sometimes my decision is dictated by the recipe. For example, if I am using beans to make a dessert (this totally happens), I want to avoid a very bean-y taste. Despite draining and rinsing canned beans, I find that the packaging liquid that they are stored in often has a distinct flavor. It’s not bad. It’s just bean-y. For these recipes, I use dried beans.

Canned beans are typically my go-to when I decide to make a certain meal on the day that said meal is intended to be consumed. That is, I didn’t account for overnight soaking time. Beans are vegan staple, so many of my meals feature them. For nights where I just need to put a healthy dinner on the table, I am more than happy to use canned beans.

If you do use canned beans, be sure to drain them and thoroughly rinse the beans in fresh water. Then, simmer them for at least 30 minutes. This will help to soften the beans and allow them to add flavor to whatever dish you are making.

Cannellini vs Great Northern and Other White Bean Substitutions

It almost never fails – you go to the grocery store in search of one type of white bean and you’re only able to find three other types of white beans. So, which do you choose? Can you substitute Cannellini Beans for Great Northern Beans? Or, can Navy Beans be used in place of Lima Beans?

The truth is, you can pretty much swap out one type of white bean for another and come out okay. If you’re not convinced, then my personal theory is match texture for texture. For example, if you’re wanting to make a recipe with a meatier texture, use Cannellini Beans or Great Northern Beans. One can be substituted for the other pretty easily. Likewise, if you’re using beans to make a creamy dip, Navy Beans can easily be swapped for Baby Lima Beans (aka Butter Beans).

Now that you know all about white beans you’ll be able to incorporate these healthy vegan ingredients into your own recipe rotation. Of course, if you’re looking for white bean inspiration, I’m happy to help you there too! Here are a few of my favorite white bean recipes:

Looking for the ultimate in vegan comfort food? This pappardelle pasta with an easy kale and white bean ragù recipe will make even the coldest nights warm and cozy. Bring this Italian recipe to your table in a vegan friendly way by adding a healthy cashew cream sauce made with cashews, nutritional yeast and fresh lemon juice.