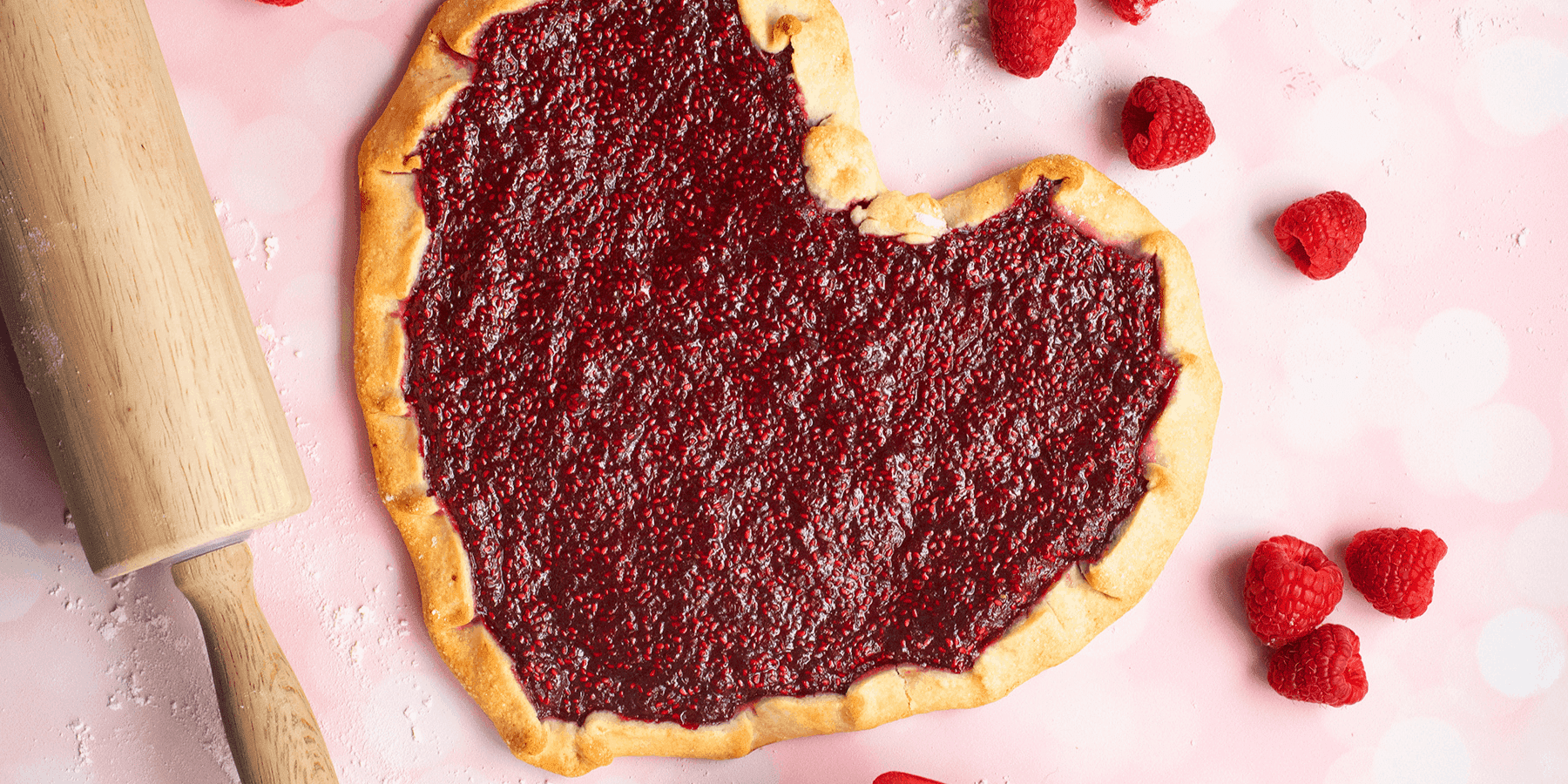 This Raspberry Galette Raspberry: Celebrate Valentine’s Day with this Heart-Shaped Vegan Fruit Galette post includes affiliate links. When I find a great product or service, I like to share it with my readers. Sometimes I use affiliate links so I can earn a commission for my recommendations. Thank you for your support!

What is a Galette?

If you’ve never made a galette, you’re in for a treat (in more ways than one)! Here are all the reasons to love making homemade galette:

A galette is a free form pie, making it a far simpler dessert for beginners than a traditional pie. There’s no pie dish, crimping or lattices to manage. It’s just a humble pie crust and its filling.

A galette embraces that rustic appearance that naturally happens when I try and bake anything. It’s like my baking wing woman – it takes my weaknesses and makes them strengths.

It’s a natural form of portion control. A slice of galette is as satisfying as a piece of pie for half the caloric price.

A galette, made right (which I will describe below), needs no fork. Unlike pie, you can pick up a piece and go – making it a great dessert option for family BBQs and picnics.

How to Make a Vegan Fruit Galette

There are a few key elements to making this raspberry galette recipe. The first element is the eggless pie crust recipe. Believe it or not, it’s very possible to get a light, flaky vegan pie crust.

The second element is the galette filling. I like mine to be as close to just plain fruit as possible.

And as for the third element, that’s in the baking. Baking sheet placement, temperature and timing all contribute to the perfectly imperfect vegan fruit galette.

Making a Vegan Pie Crust for this Raspberry Galette Recipe

To make this raspberry galette vegan, I needed a dairy-free alternative to butter – a common ingredient in pie crust recipes. For this recipe, I chose to use a high-quality vegan butter. I like Miyoko’s European Style Cultured Vegan Butter. Like dairy butter, it stays solid at room temperature, an essential characteristic for pie crust recipes. It’s also unsalted, allowing you to control the amount of salt you add.

The key, of course, is to keep that butter cold! As butter melts, the butter will create steam and the steam will create air pockets, leading to a flaky vegan pie crust. My trick is to grate the butter and then put it in the freezer until I’m ready for it. Then I pulse it into the flour and salt with some ice water. The small, cold pieces require less friction to combine, helping to keep the butter cold.

The trick to a good, flaky pie crust is keeping the butter cold. As you combine it with the flour and salt you want it to remain in its solid state. So, when the dough is fully mixed you still want to be able to identify flakes of butter in it.

A Note on That Heart-Shaped Pie Crust

It’s February 9th so yes… I am playing up the lead in to Valentine’s Day by making this crust heart shaped. It’s far easier than you might think, but of course, it’s not necessary. I just simply cut the crust into the shape of a heart before adding the filling and baking. It’s freehand too, keeping in tradition with the beloved imperfections of a galette.

Tell Me About the Raspberry Galette Filling…

The raspberry filling is where this vegan fruit galette really shines! For shake of ease, expense and seasonality, I used frozen raspberries for this recipe. To make the filling, I simply simmered the raspberries with ½ cup of pure maple syrup until they began to break down. Then I removed them from the heat and added 3 tablespoons of chia seeds.

What Are Chia Seeds?

If you’re new to vegan cooking, you may not yet be familiar with chia seeds. If that’s the case, don’t worry! I’ve got you covered. You can learn all about chia seeds in my Vegan Cooking 101: How to Cook with Chia Seeds post. In the meantime, here are just a few fun facts:

Why Chia Seeds Are the Key to This Raspberry Galette Recipe

It’s that last point above that makes chia seeds the key to this vegan fruit galette. Normally, pie crusts are brushed with beaten eggs to create a barrier between the crust the filling. This keeps the crust from getting soggy. Eggs, of course, are a no-go in vegan baking, but they’re not necessary anyway. The chia seeds absorb the liquid from the raspberries, creating a perfectly firm, 100% natural fruit galette filling.

Do You Love This Raspberry Galette Recipe?

If you love this Raspberry Galette Recipe, then be sure to check out my other vegan galette recipes. Do you have a sweet tooth? Then my Strawberry Rhubarb Galette needs to be in your rotation. Is savory more your speed? My Savory Mushroom Galette is a must try!

Once you start making galettes, you’re going to be hooked! So, here’s another vegan fruit galette recipe for your rotation. This one is a take on a summertime favorite: Strawberry Rhubarb Pie! This sweet treat has a hint of sour (complements of the rhubarb) that is a true taste bud pleaser!

Galettes don’t have to be sweet! They can be savory too! This Savory Mushroom Galette is so rich and flavorful, it might just blow your mind. It’s packed with umami-rich vegan ingredients like mushrooms (duh), onions, garlic and sautéed tomato paste, along with plenty of herbs and spices.

What’s in My Kitchen to Make Raspberry Galette Recipe Easier?

I picked the Hamilton Beach 8-Cup Food Processor. I use my food processor all. the. time. But, for this recipe, I used it to make the pizza dough. I like making pizza dough in my food processor because it’s a lot easier than trying to make it with a bowl and spoon and, damn, my KitchenAid mixer is really heavy. I only get that out of the cabinet when there are cookies involved.

Love to cook with cast iron? Ever forget how hot those handles get? Yeah, me too. The Ove Glove will help to protect your hands when cooking (and forgetting).

These pot holders are heat safe to 540 degrees and two come in a package – one for holding the handle and one for supporting the bottom of your cast iron skillet (because we all know it’s too heavy to pick up with one hand). 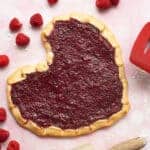 For the Vegan Pie Crust

For the Raspberry Galette Filling