This Baked Peach Turnovers Recipe: Celebrate Summer with Homemade Vegan Peach Hand Pies post includes affiliate links. When I find a great product or service, I like to share it with my readers. Sometimes I use affiliate links so I can earn a commission for my recommendations. Thank you for your support!

This discovery coincided with the delivery of a case of fresh peaches this August and inspired this Baked Peach Turnovers Recipe. Peach turnovers, also known as peach hand pies and peach popovers, marry the simple flavor of fresh peaches with the flakiest of crusts. This ensemble is then finished with a drizzle of homemade peach glaze.

Believe it or not, these Peach Hand Pies are also dairy free and vegan. If that’s not enough to make you feel good about eating dessert, they also use chia seeds as a natural thickener, adding vegan protein, antioxidants and fiber.

What is Phyllo Dough?

Phyllo dough (also spelled filo dough) is a paper-thin sheet of dough that’s used in both savory and sweet recipes. It’s Greek by origin (filo means leaf in Greek) so if you’ve encountered it before, it’s was likely in a recipe for Spanakopita or Baclava.

Phyllo dough is a simple combination of flour and water. It contains very little fat, but most recipes recommend brushing each layer of phyllo dough with oil to achieve a flaky, crispy layered crust.

Phyllo dough is usually vegan so it’s an easy thing to pick up ready-made at the grocery store. You will typically find it in the freezer section.

To defrost it, leave it in the refrigerator and then bring it to room temperature just before baking with it. Phyllo dough’s super thin texture makes it susceptible to drying out, so cover and sheets you are not working with, with a damp towel.

Leftover phyllo dough can be rewrapped and stored in the refrigerator for use within 1-3 days. Defrosted phyllo dough should not be refrozen. It will become brittle if returned to the freezer.

What is a Turnover Pastry?

Turnover pastries are exactly as the name suggests. They’re made by adding a filling to a length of dough, then turning it over, sealing it and then baking or frying it. Phyllo dough turnovers are folded over several times, allowing for many different layers of dough to separate and expand as the turnovers bake.

Turnover pastries can be both savory and sweet, with a variety of options for the fillings. Fruit hand pies, like these Baked Peach Turnovers, apple turnovers and blueberry turnovers are among the most popular, while savory hand pies might include a mushroom or potato filling.

Baked Peach Turnovers: How to Make the Filling

The filling for these Peach Hand Pies is really simple. It uses only fresh peaches, maple syrup and chia seeds. The fresh peaches are first cooked on the stove on medium-low heat. As they cook, the peaches release their juices, some of which is used to create the peach glaze that is added at the very end of the recipe.

A small amount of pure maple syrup enhances the natural sweetness of the peaches and chia seeds work to absorb the juice so that the filling is naturally thickened before being folded into the turnovers.

[Tips & Tricks] In addition to being vegan-friendly, chia seeds are also a health food. Known as a superfood, chia seeds pack a lot of nutritional punch into a very small space. They’re high in anti-oxidants and fiber. To learn more about cooking with chia seeds, be sure to check out my How to Cook with Chia Seeds post.

Many hand pie recipes use butter and/or cream in the making of the filling, but it’s pretty easy to avoid if you want to make vegan hand pies.

For this recipe, I didn’t use any butter to make the filling, relying only on the juices from the fruit and some maple syrup. Then, instead of brushing each layer of phyllo dough with butter, I simply sprayed it with a thin layer of coconut oil.

To use as little oil as possible, I added coconut oil to this refillable oil spray dispenser. It’s non-aerosol, easy-to-clean and provides a fine mist of oil with each pump.

An egg wash is a common feature in the pastry world. This whipped combination of egg and milk is brushed over pastry doughbefore baking to give the final product a glossy, golden brown finish. Egg washes also work as a seal, preventing a pastry’s filling from leaking during baking.

Needless to say, the combination of eggs and milk aren’t vegan friendly, but that doesn’t mean that a vegan pastry can’t look equally divine when it comes out of the oven. I’ve tried a couple of different recommendations, but the best one I’ve come across is a blend of plant-based milk and maple syrup.

Combined at a ratio of 1 tablespoon of plant-based milk to 1 tsp of maple syrup, this vegan egg wash serves the duel-purpose of sealing pastries and giving them that out-of-the-oven golden glow.

Do you love this Baked Peach Turnovers recipe? Be sure to check out other vegan desserts! If you’re into fruit, then my Strawberry Rhubarb Galette is for you! Chocolate more your style? Then you’ll love my Silken Tofu Chocolate Mousse.

I am galette obsessed. Peach, plum, mushroom…this strawberry rhubarb galette. Not familiar with galettes? All you really need to know is how easy they are to make. This galette recipe features a homemade vegan pie crust, but you can make things even easier by using a store-bought crust for “practice” (as I like to call it). The filling for this strawberry rhubarb galette is silly easy. I made it with fresh strawberries and rhubarb, sugar and chia seeds.

Wait! Stop! I know what you’re thinking: tofu for dessert? I totally get it. This one took me a little while to work up the courage to try, but it’s so worth bringing into your vegan dessert rotation. It’s easy, 5 ingredients and light as air – just as chocolate mousse should be! 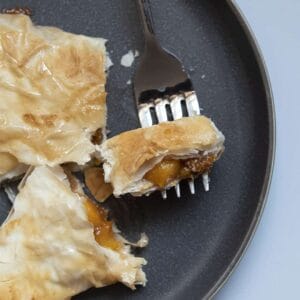 For the Peach Hand Pie Filling

For the Vegan Egg Wash

For the Peach Icing

For the Peach Hand Pies