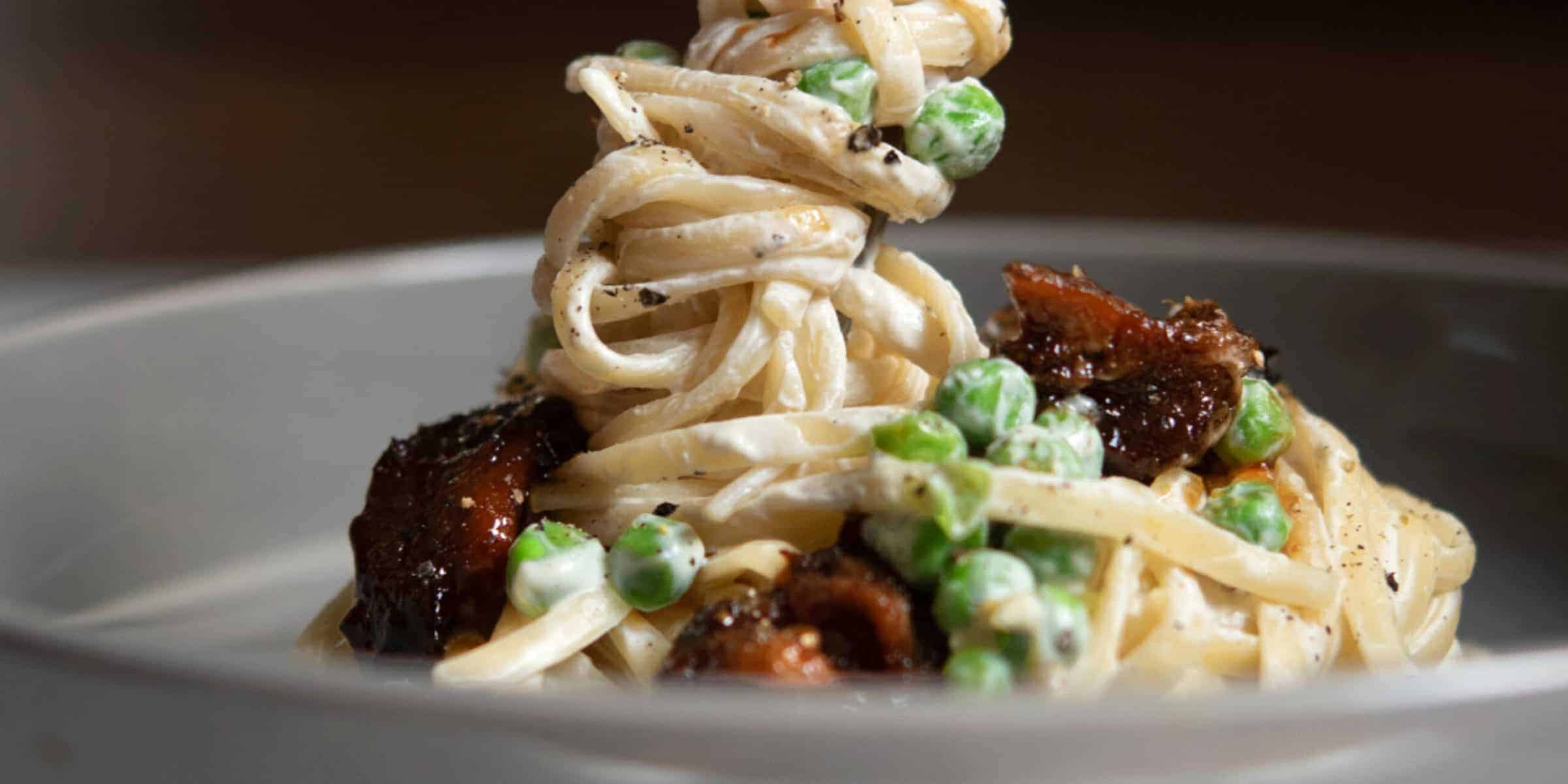 This Creamy Cashew Alfredo with Vegan Pancetta and Peas recipe includes affiliate links. When I find a great product or service, I like to share it with my readers. Sometimes I use affiliate links so I can earn a commission for my recommendations. Thank you for your support!

There are few foods that check the comfort food box like Fettuccini Alfredo. It’s creamy and carb-y – the perfect food for when the weather is gloomy. One notch above classic Fettuccini Alfredo is Pasta Carbonara, which adds the decadence of eggs and bacon to the perfection of chewy, al dente pasta.

As a plant-based eater, you may have thought that you had to say goodbye to these tasty combinations, but that’s not the case at all. These classic dishes are quite easily and deliciously replicated as vegan-friendly meals with the help of creamy cashew alfredo sauce and vegan pancetta.

How to Make Non-Dairy Alfredo Sauce

Traditional alfredo sauce is a rich combination of butter, heavy whipping cream and parmesan cheese. And while all that dairy may seem hard to substitute, a simple combination of soaked cashews and water, creates the creamy vegan equivalent to a heavy cream sauce.

In lieu of parmesan cheese, a tablespoon of nutritional yeast and fresh lemon juice lend this vegan pasta dish the same notably satisfying tang. Add a little garlic and salt and – Viola! – you have yourself an outstanding creamy cashew alfredo sauce.

When veganizing a recipe, it helps a lot to know what it is you’re looking to substitute with a plant-based ingredient. In the case of this Creamy Cashew Alfredo recipe, I needed to come up with a satisfying pancetta substitute.

If you haven’t come across it before, pancetta is very similar to bacon. It’s pork belly cured with salt and it’s often served in cubes that are pan-fried before being added to a dish. As such, I knew I was after a salty with a hefty dose of creamy fat. And, because my best memories of bacon are of the maple-smoked kind, I wanted to add a little sweetness as well.

If you’ve been following my recipes lately, you know that I have access to some pretty interesting mushroom varieties. I’ve had the good fortune of connecting with a local mushroom grower / hunter and they hook me up every week with some really fun mushrooms.

As I get a handle on the different tastes, textures and cooking techniques for each variety, I’ve been trying them out in different recipes. For example, a couple of weeks ago I used Lion’s Mane mushrooms to create really tasty, texturely accurate Vegan Crab Cakes.

I was so impressed by the meatiness of the Lion’s Mane mushrooms that I decided to try them out as a pancetta substitute in this Creamy Cashew Alfredo vegan pasta dish. They result was pretty divine.

I know that access to specialty mushrooms isn’t readily available for everyone, so rest assured that this tasty vegan pancetta substitute will work equally well with different mushrooms, like button mushrooms or shiitakes. Chopped Portobello mushrooms would also work very well, I think.

Getting the Maple-Smoked Flavor into Your Vegan Pancetta

Whatever mushroom you decide to work with, you’ll get the bacon flavor from a combination of tamari, maple syrup, balsamic vinegar and smoked paprika. To thicken the sauce, I add a cornstarch slurry. When cooked, this sauce becomes thick and sticky. Add that to the crispy exterior of the mushrooms and you’ve got a really tasty pancetta substitute to work with.

When serving this dish, I like to time it so that the pasta and peas are hot when they’re tossed together. Given that I only have two hands, I will already have the mushrooms cooked and the cashew alfredo sauce made.

To keep the crispy exterior of the vegan pancetta, I recommend reheating the mushrooms in a skillet. As soon as they’re hot, add them to the pasta and serve it immediately with fresh ground pepper.

Do You Love This Creamy Cashew Alfredo with Vegan Pancetta and Peas Recipe?

Do you love this Creamy Cashew Alfredo with Vegan Pancetta and Peas recipe? Be sure to check out other vegan pasta dishes. If you’re into red sauce, then Vegan Penne Alla Vodka is for you! Forever-searching for a vegan Bolognese sauce? Then you’ll love my Vegan Lentil Bolognese.

Nothing says comfort food like a big bowl of pasta with a rich, homemade vodka sauce. And now, with this vegan vodka sauce recipe, plant-based eaters can get the same satisfaction. This dairy-free vodka sauce is creamy, bright and so easy to make!  It comes to you straight out of my new cookbook 5-Ingredient Vegan Cooking: 60 Plant-Based Recipes with Few Ingredients and Lots of Flavor. I thought you might like to a do a little test drive of this collection, so here it is! On my blog with all of the details!

This vegan lentil bolognese ranks among the best vegan pasta sauces — at least in my family! This sauce is so easy to make and it works well in a variety of vegan pasta recipes — like my Easy Vegan Lasagna recipe to my Creamy Vegan Stuffed Shells! 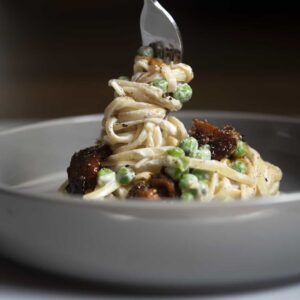