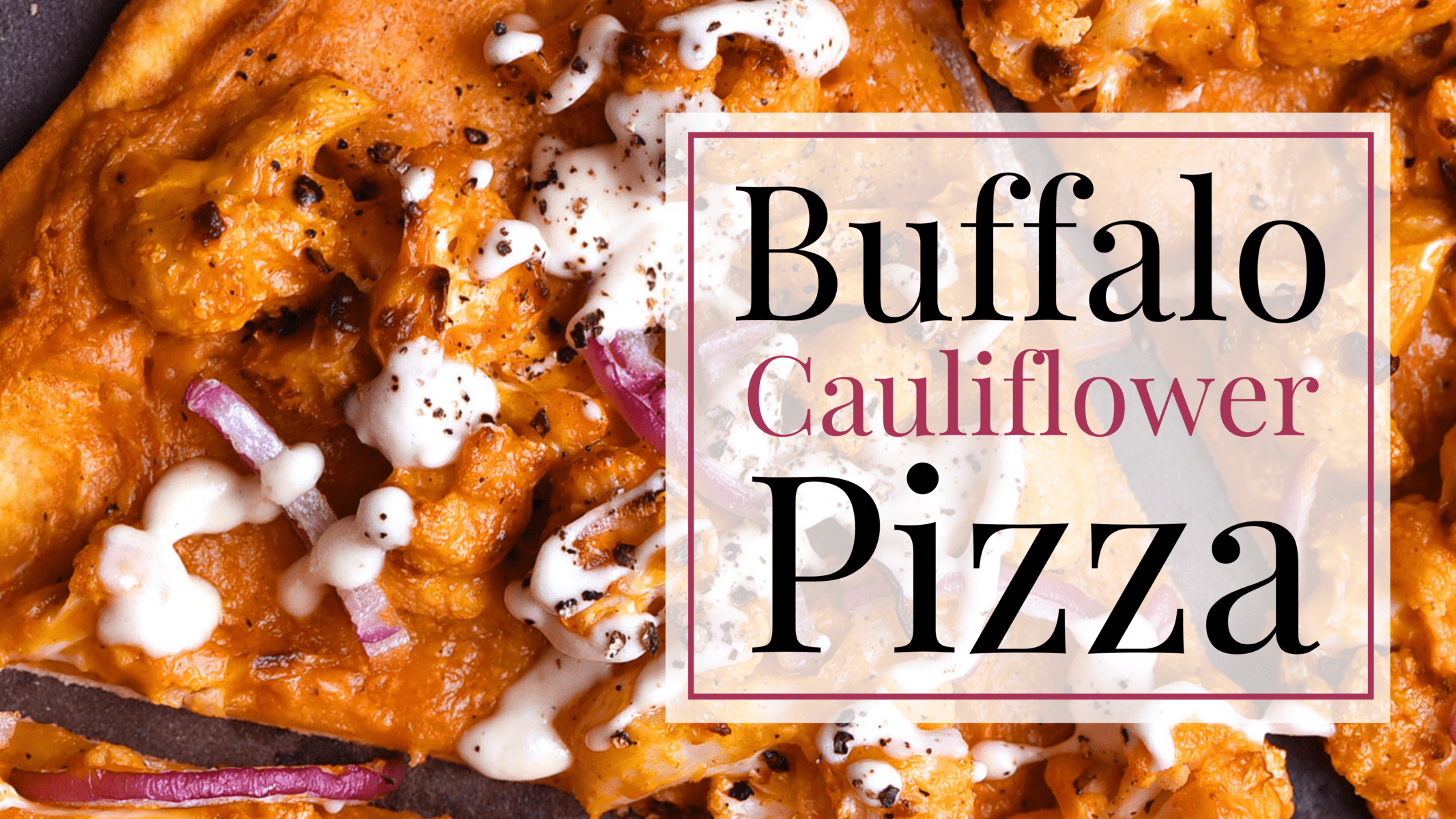 There are few foods that I find as comforting as those dipped or doused in buffalo sauce. This could be because I grew up a stone’s throw away from the Anchor Bar in Buffalo, New York, which lays claim as the home of the buffalo wing.

It’s a tougher place to hang out as a truly-trying vegan, so I’ve had to take my buffalo sauce matters into my own hands. And this Buffalo Cauliflower Pizza is one such solution.

How to Make Buffalo Cauliflower Pizza

This vegan buffalo cauliflower pizza recipe is pretty easy and that even includes the homemade pizza crust!

When I have the time, I like to make my own pizza dough. And by time, I mean an extra 10-15 minutes because this pizza dough recipe is not only easy, it’s also quick. There’s no time to wait for the dough to rise and I don’t bother to make it perfectly round.

Homemade vegan pizza tastes better when it has a rustic feel to it anyway.

This crust is a simple combination of all-purpose flour, salt water, dry active yeast, maple syrup and extra virgin olive oil. I throw it all into my food processor and voila! Enough homemade pizza dough for two good-sized pizzas.

Pre-bake your pizza stone in a 500º oven. This makes for an extra crispy crust!

The answer, of course, is one that you make yourself. Buffalo sauce is often made with dairy, so you do have to be diligent if you’re adhering to a strict plant-based diet.

You don’t have to be tied to your kitchen though, because there are commercial vegan buffalo sauce options available. My favorite is Primal Kitchen’s No-Dairy Buffalo Sauce. It’s made with cashew butter instead of dairy butter, making it a vegan-friendly option.

The true star of the Buffalo Cauliflower Pizza though is repurposed buffalo cauliflower wings – the desired game day snack choice of vegans everywhere.

Buffalo cauliflower wings are simply cauliflower florets that are baked, battered or fried with buffalo sauce. If that sounds delicious to you all on its own, you should check out my Baked Buffalo Cauliflower Wings recipe.

Why are my cauliflower wings soggy?

If you’re baking your buffalo cauliflower wings, they could be turning out soggy for a number of reasons.

First, you need a hot oven. I bake my cauliflower wings are 450º. I also steam by cauliflower and allow it to air dry before battering it and baking it.

Also be careful not to crowd your baking sheet when you’re adding the cauliflower. If it’s packed too tight, it will steam instead of bake – leaving you with soggy cauliflower wings.

These tips apply to making the buffalo cauliflower for this pizza as well, although I don’t batter the cauliflower in this recipe. Make sure that the florets are small – you’ll want them that way as a pizza topping – and completely dry before roasting.

Seriously though, there isn’t an overwhelming cauliflower flavor. When it’s roasted, cauliflower has a slightly sweet, nutty flavor that doesn’t overpower the other flavors in this Buffalo Cauliflower Pizza. Not that overpowering buffalo sauce is easy.

Are cauliflower wings better for you?

Well, yes, in general. Cauliflower is a hotbed of vitamins and minerals, including Vitamins C, K and B6. It’s also a good source of Folate, Potassium and Manganese.

This answer, of course, depends in part on how you prep them, but baking is always a healthier choice than deep frying. Follow my steps above and you’ll get crispy buffalo cauliflower wings.

This Cauliflower Buffalo Pizza though, has an edge over traditional pizza in that it doesn’t have cheese. This is where most of the fat and calories come from. Instead, I drizzle a little bit of cashew cream over my buffalo cauliflower pizza for some extra non-dairy flavor.

Do You Love This Buffalo Cauliflower Pizza Recipe?

If you’ve ever encountered the Nashville Hot Chicken Sandwich, you’ll know that I had no choice but to create the vegan version. This recipe goes out to my husband and my friend Erin G. — two of my favorite people who are fans of this Southern-fried fare.

When I was growing up, my family used to occasionally go out for buffalo wings and fries as a special junk-food treat. This was usually on a cold winter night after a day of skiing. It was just a little ritual that we had.