This Buffalo Cauliflower Sandwich: The Best Vegan Hot Chicken Sandwich Recipe Out There! includes affiliate links. When I find a great product or service, I like to share it with my readers. Sometimes I use affiliate links so I can earn a commission for my recommendations. Thank you for your support!

If you’ve ever encountered the Nashville Hot Chicken Sandwich, you’ll know that I had no choice but to create the vegan version. This recipe goes out to my husband and my friend Erin G. — two of my favorite people who are fans of this Southern-fried fare.

The Nashville Hot Chicken Sandwich originated in Nashville almost a century ago. As the tale goes, it is the product of the fury of a woman scorned. The classic hot chicken sandwich is made with buttermilk-drenched bone-in chicken, dredged in flour and then deep-fried until it achieves a thick, crispy exterior. It is the stuff Southern fried food dreams are made of.

In addition to its crispy, breaded exterior, the Nashville Hot Chicken Sandwich’s claim to fame is its spicy sauce. Featuring cayenne pepper and brown-sugar this sauce gives this fried chicken sandwich is namesake adjective: HOT.

Buffalo Cauliflower Sandwich: How the Hot Chicken Sandwich Gets Veganized

Just because I’m into plant-based cooking doesn’t mean that I don’t enjoy classic comfort food. I know the joys of deep-fried food. Believe me, I knew what I was up against when I embarked on the journey to recreate the Nashville Hot Chicken Sandwich as vegan-friendly fare.

In addition to veganizing a classically meat-based dish, I also decided I wanted to bake it. So, if you’re skeptical, I can certainly understand that. You’d be wrong to dismiss this version out of hand though. It’s really good. So good my husband claims that he could “eat it every day.”

As the title suggests, I swap out the chicken in this recipe with cauliflower. If you’re wondering how this cruciferous vegetable makes for a better-than-suitable substitute, here’s the trick. You steam the cauliflower first.

Steaming the cauliflower ensures that the center will be soft while the exterior will be crispy. I use this trick a lot actually. You might not believe it, but when prepared this way cauliflower florets make a great substitute for chicken in a number of vegan recipes. If you’re curious, check out my Crispy Orange Cauliflower with Steamed Asparagus or my Crispy Cauliflower Vegan Tacos.

This vegan version of the hot chicken sandwich is also baked instead of fried. It’s true — baking at a high temperature can yield some pretty spectacular results.

Baking the cauliflower florets requires a lot less oil than frying. I use only 2 tbsp of safflower oil for a recipe that will serve 4-6 people. One tablespoon is used to baste the bottom of the baking sheet and then I lightly spray the other tablespoon on the cauliflower part way through the baking process. To control the amount of oil, I use a refillable spray oil dispenser. I love this kitchen gadget as a tool for even oil distribution. It’s also non-aerosol and refillable.

Add Some Crunch to Your Buffalo Cauliflower Sandwich with Vegan Coleslaw

Coleslaw is a major component of a successful crispy cauliflower sandwich. The creamy, crunchy tanginess of the coleslaw is the perfect offset to the heat of the crispy cauliflower. To achieve this, I season mine with spicy brown mustard, tangy apple cider vinegar and the simple wonders of salt and fresh ground pepper.

For this vegan recipe, I decided to make a broccoli slaw. To keep things easy, I bought a pre-shredded, pre-mixed bag of the slaw. If you haven’t had it before, broccoli slaw swaps out cabbage for shredded broccoli stalks. It’s a nice twist on the original.

Traditional hot chicken sandwiches feature a homemade buffalo sauce. This sauce is heavy on cayenne pepper and features brown sugar, garlic and paprika. I simplified this recipe by using one of my favorite vegan bottled hot sauces. It’s locally made, so I feel good about it. If you’re looking to replicate this short-cut, the ever-popular Frank’s Buffalo Hot Sauce is vegan.

First things first — you have to toast the hamburger buns. Toasting brings out the flavor in the bread and provides satisfying texture for this sandwich.

The crispy, baked cauliflower is best served right out of the oven. If you have to make this dish in advance, be sure to warm the cauliflower in the oven. Reheating it in the microwave will result in a soggy outcome.

I like to make the broccoli slaw in advance and let it chill in the refrigerator while the cauliflower bakes. This gives the flavors in the dressing a chance to meld. I also really like the contrast between the hot, spicy cauliflower and the cool, tangy coleslaw.

For the final touches, I like to add a bit more buffalo sauce to my sandwich. I love things spicy! Traditionally, hot chicken sandwiches are served with a few sweet pickle chips on top. I’ve just never warmed up to sweet pickles. If that sounds good to you, by all means pile them on!

This buffalo cauliflower recipe is built on my earlier recipe for Buffalo Cauliflower Bites. Taking a page from the Buffalo wing’s book, these bites are actually cauliflower florets baked to crispy perfection and tossed in spicy buffalo sauce. Put them on your list for vegan game day snack options!

Are you interested in exploring more vegan twists on comfort food? If so, be sure to check out some of my other vegan comfort food recipes, like:

This easy stuffed shells recipe is the perfect introduction to vegan pasta. Whether you’re feeding omnivores or a true carnivore, you can’t go wrong with this vegan recipe. For starters, everyone loves pasta shells. They’re just a fun way to eat pasta. They’re also the perfect vehicle for taking a traditional red sauce pasta dish to new levels. There’s just so much capacity for flavor!

Looking for new and interesting vegan dinner options? Then you’ve got to check out these BBQ Black Bean Vegan Nachos! These vegan nachos are far healthier than their traditional counterpart. They feature slow-simmered, fiber-loaded bbq black beans and Vitamin A packed sweet potatoes. And that creamy “cheese” sauce? That’s 100% homemade, plant-based vegan cashew cream sauce. The party doesn’t stop there though! As you can see, these vegan nachos have achieved fully loaded nacho status.

I’ve tried a lot of non-aerosol oil dispensers over the years. Most of them were disappointments, either because they delivered a direct stream of oil instead of a mist before becoming clogged or because my hand would cramp so badly trying to hand pump out a few measly drops.

These dispensers are game changers though. I have the set of two, one that keeps olive oil and a second that I filled with grapeseed oil. They help me to use a fine amount of oil when I only need a small amount.

Steaming vegetables is an excellent way to retain their nutrients. It’s also a great pre-roasting trick for vegetables like cauliflower. Steaming cauliflower before roasting it gives it a wonderful soft-on-the-inside, crispy-on-the-outside texture which is great for recipes like my Cauliflower Buffalo Wings and Roasted Cauliflower in a Sticky Lemon Sauce.

I love this steamer basket because it’s simple, resizable and cleans up easily. It’s also inexpensive and compacts well for easy storage in the kitchen.

This wire skimmer is a handy kitchen tool to have around. I use it when I make Homemade Soft Pretzels and homemade bagels. It makes retrieving both from the hot alkaline solution so much easier. I also like to have it for recipes like this Roasted Tomato Compote or my Vegan “Tuna” Towers, both of which require blanching tomatoes. 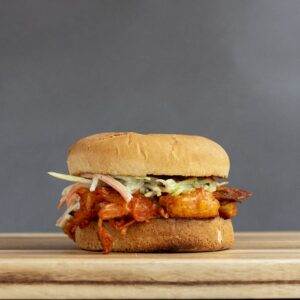