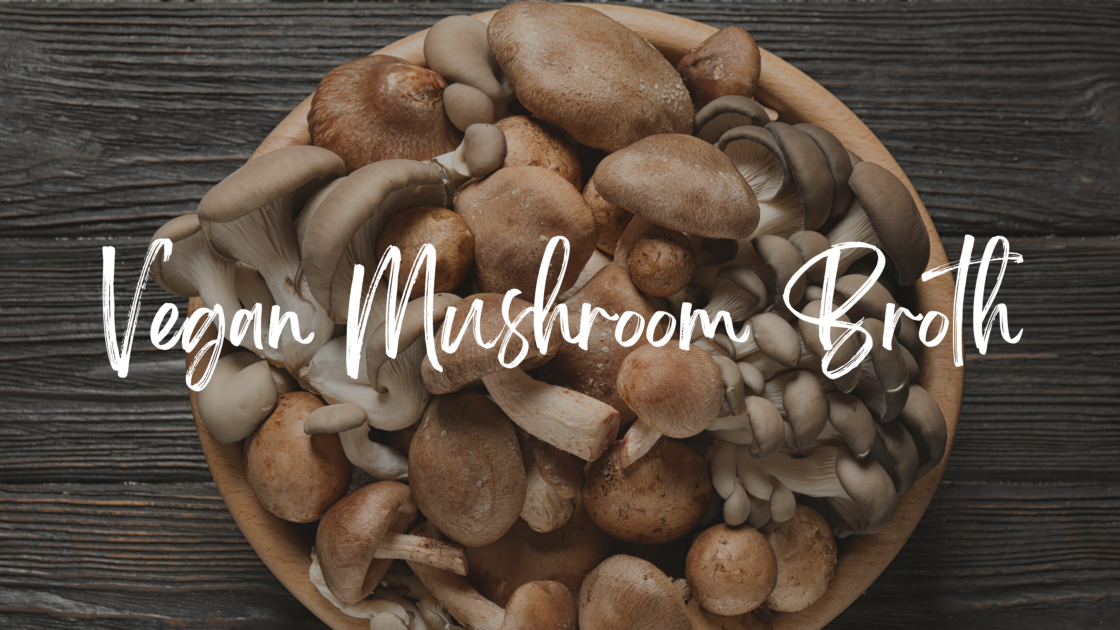 This Umami Bomb Vegan Mushroom Broth: How to Make Mushroom Broth with Fresh Mushrooms & Miso Paste post includes affiliate links. When I find a great product or service, I like to share it with my readers. Sometimes I use affiliate links so I can earn a commission for my recommendations. Thank you for your support!

One of my favorite dishes – at home or when I’m out – is a big, steaming bowl of ramen noodle soup. As you might be able to tell from my recipe history, I’ve tackled this dish from every angle.

I double-down on miso paste with my Miso Ramen with Miso Glazed Delicata Squash and get veggie heavy with my Veggie-Loaded Easy Vegan Ramen Soup. Today though, I want to share a new recipe… for the broth.

This Vegan Mushroom Broth is an umami bomb. There’s no other way to say it. It features the rich, savory flavors of mushrooms (both dried and fresh), onions, garlic, miso paste and soy sauce. It’s so good that I sometimes sip it on its own as an afternoon snack.

What is Umami Broth?

Let’s back up. What is umami, where do you find it and why do you care?

Umami is one of the five senses. Americans commonly refer to it as savory, but in Japan this taste sensation is known as umami.

Want to learn more about plant-based umami? Be sure to check out my Vegan Umami post for more details on umami-focused vegan cooking.

Umami is the body’s response to glutamates in food. When taste receptors recognize umami, they tell the body to expect protein, which in turns causes us to salivate.

Wait, protein? Does this apply to vegans?

Do Plant-Based Foods Have Umami?

Okay, first of all, it’s not hard to get protein on a plant-based diet, but it is true that the average eater thinks meat when they think about protein. But plenty of foods deliver on the umami front. Cured meats and aged cheeses are high on the light, but these plant-based foods are also good sources of umami:

Aging and fermentation tend to increase the umami sensation in foods as well, that’s why ingredients like soy sauce, miso paste, dried mushrooms, nutritional yeast and kimchi are other really good sources of plant-based umami.

How to Make Mushroom Broth

As you’ll see when you read the recipe, I included several sources of umami. Time, another element in creating a rich, savory flavor comes into play as well.

This vegan mushroom broth recipe starts with fresh cremini mushrooms. I use these to make the mushroom broth, but I repurpose them to add to my finished soup. Cremini mushrooms are easy-to-find and inexpensive – they make a great broth on their own. If you can find shiitakes (or even better, dried shiitakes) – all the more umami for you.

The Second Round of Umami

While the broth is cooling, I’ll make a slurry of miso paste, tamari and sriracha. Both miso paste and tamari (a gluten-free alternative to soy sauce) are umami darlings. This combination adds salty, sweet, tangy sensations to this vegan mushroom broth making it a true umami bomb.

Is Vegan Mushroom Broth Good for You?

Food high in umami tend to be more filling, so you might be surprised that you don’t need much more.

And that’s only the beginning. Mushrooms have been long understood to be good for you. Cremini mushrooms – sometimes called baby bellas – are rich in antioxidants, fiber and potassium. They’re believed to help protect against cancer, boost the immune system and assist in digestion

Add some shiitakes, Lion’s Mane, oyster, portobello or other varietals and the mushroom broth health benefits just keep getting better.

Miso paste and tamari are both soy-based products which is believed to lower blood cholesterol and assist in women’s health. And don’t forget that onions and garlic are also high in antioxidants – just be sure to let your garlic rest for 10 minutes after you score it for maximum health benefits.

And, finally – ginger. Ginger is loaded with antioxidants and is thought to protect against high blood pressure, heart disease, digestive issues and the common cold.

How’s that for a simple vegan mushroom broth?

As I mentioned earlier, this vegan mushroom broth is so tasty it makes a wonderful sipping broth. 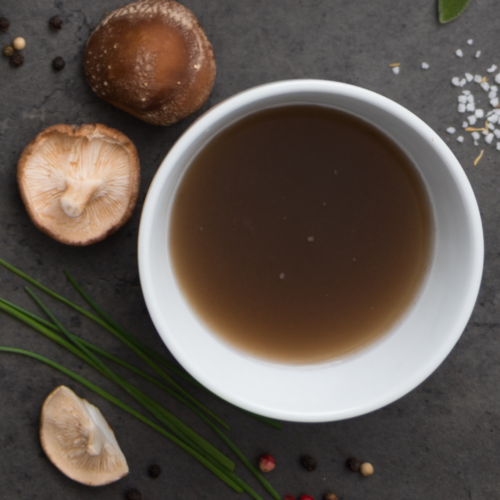