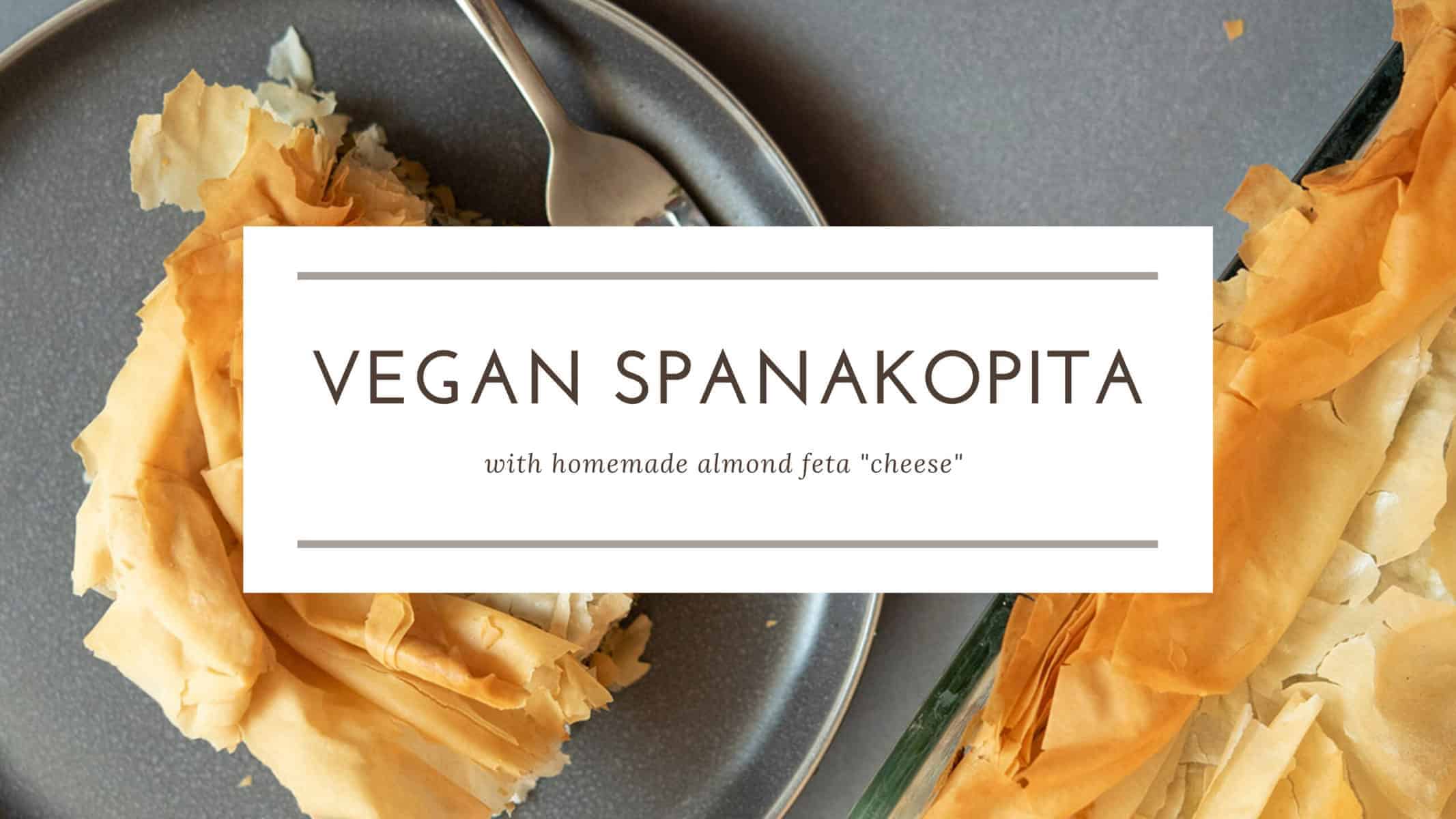 Get Your Greens with this Vegan Spinach Pie

Spanakopita is delicate Greek dish that features feta, cooked spinach, fresh parsley and dill. It’s made using phyllo dough, which is most often folded into triangles with the spinach filling inside and then baked to a flaky, crispy golden brown. For this recipe though, I took a twist on spanakopita’s traditional geometry and made it as a casserole, often referred to as a Spinach Pie. This method is easier if you’re new to working with phyllo dough and faster than making individual turnovers.

How to Cook with Phyllo Dough

Phyllo dough, also called filo dough, is thin sheets of a simple flour and water dough. It’s easiest to use a commercially produced phyllo dough, which you can find in the freezer section at the grocery store.

Yes, phyllo dough is typically vegan. As I mentioned above, it’s a simple combination of flour, water and a little bit of oil.

How to Make Vegan Spanakopita

If you’ve ever baked, you know that eggs are a common ingredient. This is because they work so well as a binding agent. There are many plant-based egg substitutions though. Bananas (see my Vegan Banana Chocolate Chip Muffins) and chia seeds (check out my How to Cook with Chia Seeds post) are very common. But my favorite vegan egg substitute is a flaxseed egg.

Flaxseed eggs are a combination of flaxseed meal and water. When flaxseed meal is combined with a liquid and set aside to rest, it absorbs the liquid and becomes a thick, viscous mixture that works to bind ingredients together as they bake. Not only that, but flaxseed eggs add a nutritional boost to vegan dishes. Flaxseeds rank near the top of the superfoods list, providing a good source of fiber and omega-3 fatty acids.

Some vegan spanakopita recipes will simply tell you to swap out feta cheese with a store-bought vegan feta cheese. I don’t find this option particularly satisfying (or appetizing) though. Commercially available vegan feta cheeses, even the best ones, are an uninspiring combination of oil and starch. It’s a tough sell when compared to the rich, creamy, briny deliciousness that is feta cheese.

I’m not a fan of tofu-based cheese substitutes either. Beyond being white and able to absorb flavors, there’s nothing about tofu that reminds me of cheese. I’ll never say never, but when it comes to vegan cheeses, I think there’s a better way.

When I make vegan cheeses, I almost exclusively use nuts. My go-to is usually cashews because they’re soft and don’t require a lot of soaking time. You’ll find them in my Cashew Cream Sauce, which is super versatile. I use it in my Vegan Stuffed Shells and my Creamy Cashew Alfredo with Vegan Pancetta & Peas. For this Vegan Spinach Pie recipe though, I wanted to use a nut with a more-mild flavor and a grainier texture. Almonds fit the bill. Almonds do require a longer soak time, so it’s important to plan ahead. And you want to start with blanched almonds (with the skin removed).

Soaking almonds to make a vegan feta cheese is a slight pain, but rest assured that the rest of this dairy free feta recipe is easy. Simply drain and rinse the soaked almonds, then blend them with a garlic clove, nutritional yeast, fresh lemon juice, a little salt and some water. The nutritional yeast gives this dairy free feta a cheese-like flavor while the lemon juice and salt add that briny tang.

If you’re new to vegan cooking, you might not be familiar with nutritional yeast. Don’t worry though. I’ve got you covered! To learn more about this popular vegan ingredient, check out my Vegan Cooking 101: What Nutritional Yeast blog post.

The filling for this Vegan Spinach Pie uses only a few ingredients (including those that are in the dairy free feta and the flaxseed eggs). The rest of the recipe includes only sautéed onions, garlic, LOTS of spinach, fresh dill and parsley. That’s it!

Most recipes call for frozen spinach, which works really well. I happened to have a lot of fresh spinach to use up before a trip, so I sautéed that.

Whether you use fresh or frozen spinach, you’ll make to make sure that you drain as much liquid as possible before adding it to your filling mixture. If it’s too wet, you’ll have a soggy mess on your hands. To do that, I simply added the cooked spinach to a strainer and pressed it with the back of a spoon to drain the liquid.

How to Layer Your Vegan Spanakopita

Phyllo dough may look complicated, but it’s actually pretty easy to use. To start, you’ll want to lightly oil your baking pan and then add two layers of phyllo dough. Follow those layers with another light layer of oil. Do this until you’ve added 10-12 layers to the bottom of the baking pan. Then add the vegan spanakopita filling. Follow this with 3 more sets of phyllo dough, adding a light layer of oil in between every set. As you’re layering the phyllo dough, gather the edges of the sheets (they’re likely hanging over the side of your baking pan) to form the crust. Make sure that this part of the crust is also brushed (or sprayed, see below) with oil. As the phyllo dough bakes this will form an artistic-looking golden-brown crust.

When making this Vegan Spanakopita recipe I really prefer to use a non-aerosol oil dispenser. This enables me to use less oil than I would if I brushed oil on to each phyllo dough sheet. I’m also less likely to tear the sheets as I add them. If you do tear a sheet, don’t worry. Just move on. Once you’re done with all your layers, give the top of the spinach pie and light brush of oil and then bake it on the middle rack for 20-25 minutes.

What to Serve with this Vegan Spinach Pie

This Vegan Spinach Pie is a quite savory, so I like to serve it with something light as a side. The last time I made this dish, I put together a simple arugula salad with cucumbers and tomatoes and a sprinkling of roasted pumpkin seeds on top. I tossed it with a very simple oil and vinegar dressing. The tartness of the dressing was a great complement to the vegan spanakopita.

Do You Love This Vegan Spanakopita Recipe?

Do you love this Vegan Spinach Pie recipe? Be sure to check out my other Mediterranean recipes! If you’re into falafel, then my Baked Falafel Burgers are for you! Forever-searching for a new way to do hummus? Then you’ll love my Navy Bean Hummus.

Check out these baked falafel burgers! Summer always has me trying to up my veggie burger game and this baked falafel recipe is one of my new favorites. Fafafel, which is made out of chickpeas, is a healthy alternative to traditional hamburgers and is super easy to make. I opted to bake these falafel burgers as well, making them less messy and better for you.

Did you know that there are other beans that make great hummus? White bean hummus, and specifically navy bean hummus, is one of the best alternative hummus recipes. Chickpeas are swapped out for white beans while 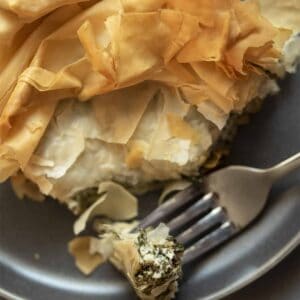